MBS Live Morning: What Can Today's Fed Minutes Tell Us That We Don't Already Know?

In the run up to the most recent Fed announcement, the 50bp rate hike was a foregone conclusion.  There was some uncertainty about how the Fed would announce balance sheet normalization, but there too, they stuck to the script.  With normalization underway and ample Fed comments in the past 2 weeks on the certainty of several 50bp rate hikes, what's left to learn from the Minutes?  In this case, it's not so much about uncovering new concepts as it is about seeing how broad the consensus is.

For instance, we know Bostic wants 2 more 50bp hikes and then to reassess in September.  We know he and other Fed members have mentioned normalization leveling off at some point.  Do they have a target level of reserves penciled in?  Is there broad agreement that they're willing to toe the line of recession in order to do their part on inflation?

Perhaps one of the most interesting unknowns is one that was alluded to in comments just 2 days ago (Bostic again... he's been prolific recently).  He reminded markets that the full effect of the Ukraine war has yet to be felt in terms of global inflationary pressure and that this was a big additional source of uncertainty for the Fed.  This is a complicated concept to consider in terms of its market impact.  On the one hand, inflation is bad for bonds.  On the other hand, a global growth slowdown is good for bonds (while also implicitly doing something to help keep inflation in check).  Ultimately, the Fed can't predict exactly what the impacts will be, so there can't really be a major revelation here, but if they were to focus more on one side of that debate vs the other (i.e. inflation over growth, or vice versa), it could be worth some small token in terms of market movement.

The other consideration is that the Minutes could clarify recent comments about rate hikes plateauing in September.  The thought here is that the market could be reading too much into those comments and thus be surprised by conversation that alludes to a higher terminal rate.  We can go ahead and rule that out, probably.  After all, Fed Funds Futures are only pricing in a "pause" inasmuch as they've stopped skyrocketing in the past 2 months (NOTE: I say skyrocketing as if they're going higher, but Fed Funds Futures trade in PRICE, so they move lower when rate hike expectations increase, just like bond yields move lower when price increases.  As such, the orange/green/blue lines on the following chart are on an inverted y-axis so up is up and down is down).

Futures are still pricing in several 25bp hikes after the next 2 meetings bring 50bp hikes. NOTE: not every Fed meeting is listed (specifically, July and November, but their expected hike amounts are still noted in parentheses on the right). 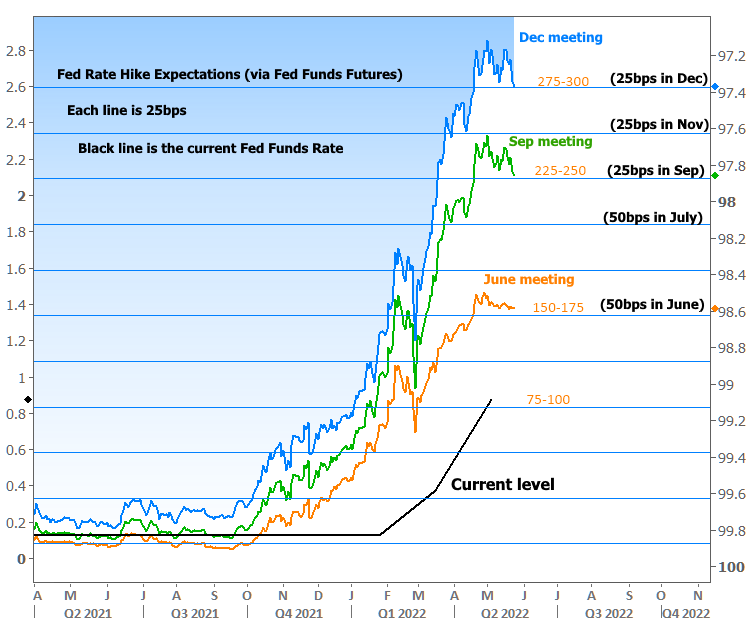