MBS Live Day Ahead: Is a New Inflation Framework Good Or Bad For Rates?

If you don't want to read to the end to get the answer posed in the headline, here is a spoiler:

Yes, a new framework is both good and bad for bonds.

It's good because the things the Fed must do in order to promote inflation are generally good for rates in the short-to-medium term.  This includes keeping the Fed Funds Rate low and buying  Treasuries/MBS, among other things.

If the bond market knows this stuff, how does it go about reacting to the probability of the news and the news itself?  This is a great question!  In the past, we've seen a lot of front-running of the "news itself" based on well established expectations.  Granted, we're talking about QE announcements and not inflation frameworks, but both are therapeutically similar for the market.

Leading up to QE announcements, we tended to see bonds improve significantly only to paradoxically move higher in yield after the QE actually began.  When QE1 ended in March 2010, yields fell quickly.  When QE2 was announced in Nov 2010, yields surged.  When QE2 ended in June 2011, yields were plummeting.  When Operation Twist was announced later that year, yields bounced.  The European crisis took over from there, but notably, the Sept 2012 QE3 announcement also gave way to upward movement in yields (even though it temporary drove mortgage rates to all time lows).

Sound too paradoxical to you?  QE making rates higher?  The chart doesn't lie: 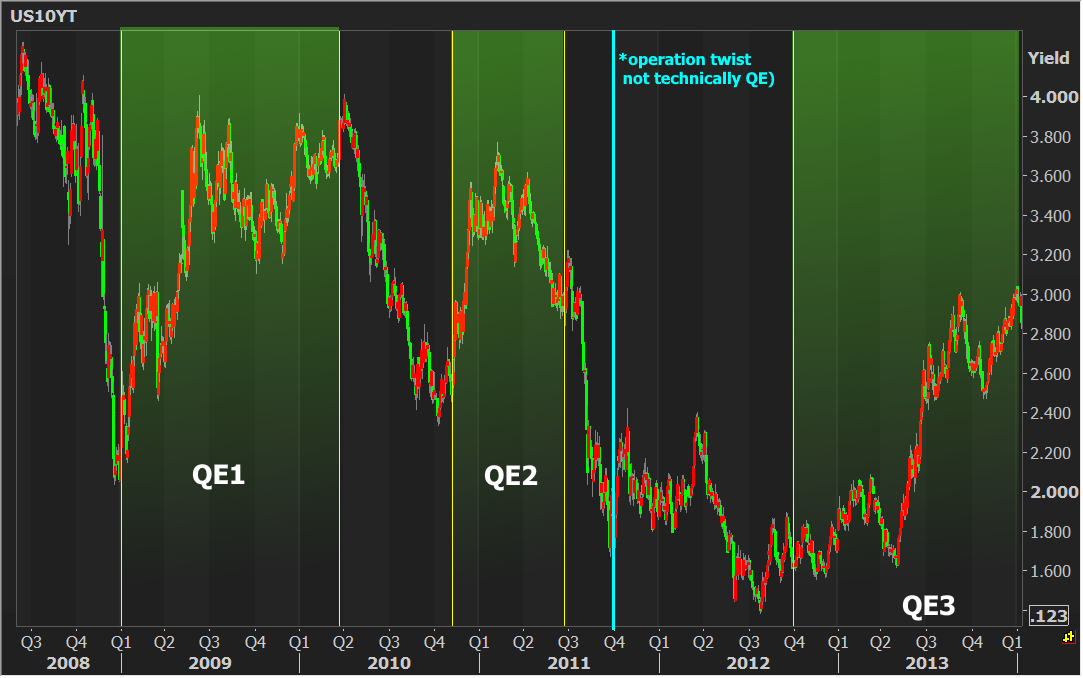 Why all this talk about inflation frameworks, Fed policy changes, and the bond market reaction?  Simply put because the market expects Fed Chair Powell to come out today and prep the market to digest a framework change to be announced with the September policy announcement.

Is it a big deal?  We'll see.  At this point, it has been hyped enough that anything is possible, but those of us who read every single newswire from every single Fed speaker are going to be hard to surprise.  They've been talking about a symmetric inflation target forever (this refers to letting inflation run hot to offset the time it spent running cool).  I think when it comes to the Fed's ability to even get inflation above 2%, the market will believe it when it sees it.  It's going to be hard for Powell to say anything to convince us of that power in today's Jackson Hole (virtual) speech (at 9:10am).