August began with bonds pushing several positive boundaries.  10yr yields had just broken a technical floor at .57//58 and 2.0 UMBS were enjoying a surge of momentum after weeks of resistance around a price of 103.  To hear MBS tell the story, that positive momentum may have leveled off, but things are still going well for bonds. The closest they came to revisiting the 103 level was on Friday and they were still nearly a half point higher at the time.

Treasuries, on the other hand, are telling a different story as yields were as high as .5788% in early morning trading hours.  Before that, they'd take the entirety of last week to begin sending a warning.  At best, yields were struggling to move into the 0.4-0.5% range.  At worst, we were seeing the early phases of a bigger-picture reversal of the months-long rally.

The move up to .5788 coincides with a bounce at upper limit of that months-long rally trend.  It can be seen in the upper yellow line on the following chart. 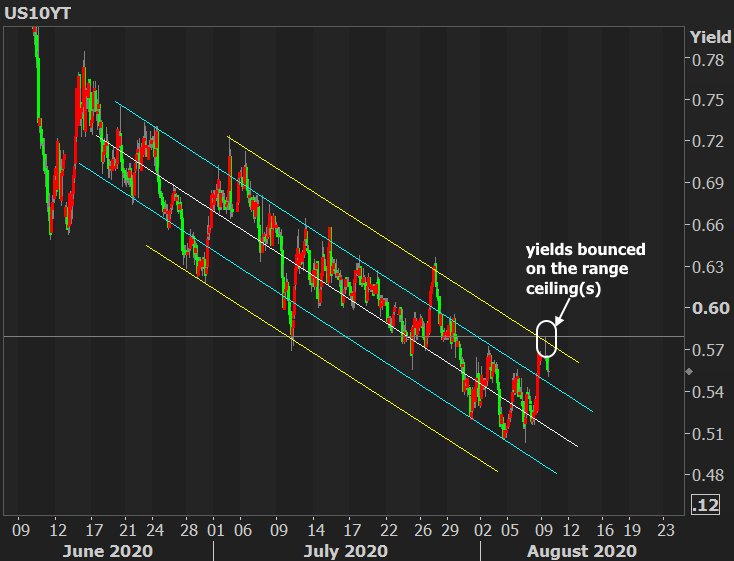 This is the bond market's way of firing a similar warning shot to that seen last week.  Yields are saying "yeah, we're aware of these upper limits and we're close enough to move above them if things don't go our way this week."

What would need to happen for things to go well for bonds in the coming days?

Successful Navigation of Supply.  This is an auction cycle week for Treasuries with record setting levels of 3, 10, and 30yr bonds being auctioned on Tue/Wed/Thu respectively.  Traders know about auction times and amounts ahead of time, but there is still something to be learned in the strength (or weakness) of the auction process. Think of all the various traders participating in the auction like the owners of many different trucking companies and think of Treasury supply as a mountain that must be moved.  All parties involved know how big the mountain is and they know how many dump trucks they own, but there's still a lot of variability in the process of getting the mountain from one place to another.

Stimulus Considerations.  This is part and parcel of the Treasury supply considerations above.  The next round of fiscal stimulus means a new mountain is popping up--one that will also need to be moved (Treasury debt is the key source of funding for fiscal stimulus).  As negotiations continue (and as presidential proclamations already roll out), the expected size of the mountain is constantly being tweaked and the threat of it's arrival is becoming more immediate.  If lawmakers can agree  on a stimulus plan that seems like it would be effective enough while not being bigger than the market expects, that would be good for bonds.  Delays in the process can also help to some extent as they push the "mountain moving date" back.

More Covid and Weaker Data.  These are the basic reaction functions for the bond market.  If Covid numbers begin surging again (they're arguably leveling off despite remaining elevated in several states) and if economic data is weaker than expected, that would generally (probably) be helpful for the bond market.  That said, as far as this particular week is concerned, econ data is a relatively small concern.  Covid numbers are much more important, but much less likely to do anything beneficial for bonds given the leveling trends in the problem states.

Nonetheless, there are a few econ reports that traders will tune into this week.  The biggest ticket will be Friday's Retail Sales report for July.  Before that, we'll get producer and consumer inflation data on Tuesday and Wednesday respectively.  Inflation data hasn't garnered a market reaction recently, but it's being watched in a general sense for 2 reasons.  If it keeps falling, the Fed's green light for stimulus will shine even brighter.  But if inflation unexpectedly begins to increase, it will force a conversation about what the curtailment of Fed policies might look like.  We all remember the taper tantrum?