Even before this week, the mid-2021 bond rally exceeded many expectations with the 10yr yield's brief love tap of the 1.25% level last week.  It's only Tuesday morning and we're already down to 1.13%.  Considering last week's high of 1.42%, it's safe to say we're in the midst of a snowball rally.  And it's not without its reasons.  Our friend Occam is pretty sure it's mostly about covid, and we're pretty sure he's right.

What's up with covid?  Oh, nothing much apart from the fact that case counts are rising at their fastest pace since January. The Monday vs Monday increase was substantial (56.9k vs 33.9k).  It was also the highest Monday since April 19th in outright terms.  The recent ramp in case counts certainly seems to correspond with the drop in yields. 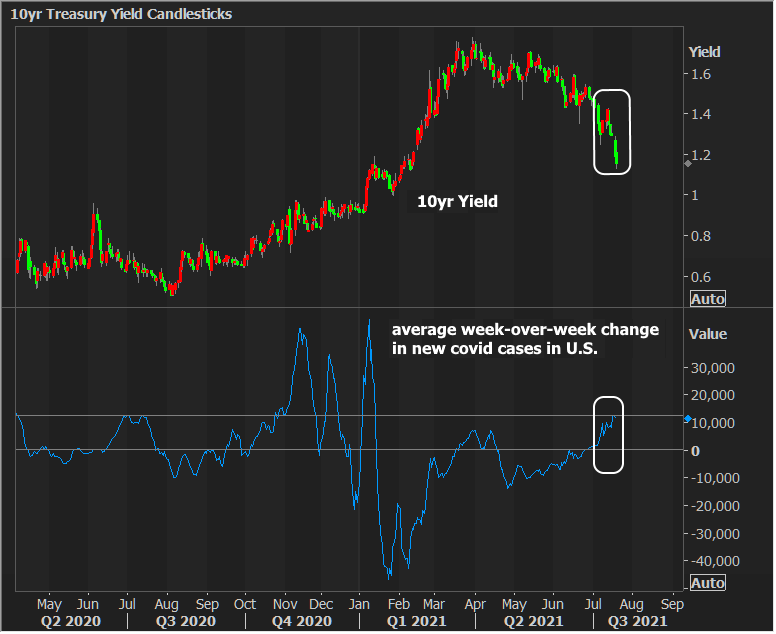 The extent to which this snowball rally can continue depends heavily on the extent to which case counts continue spiraling upward.  With a meaningful percentage of the population vaccinated, one would assume (or at least hope) that the sort of case count spike seen in the Fall/Winter isn't on the table.  Either way, it's good to remember that case counts are only important to the extent they translate to economic damage.  The bond market might be getting just a tiny bit ahead of itself in that regard--an endeavor made easier by the fact that it got way ahead of itself when yields were on the way up earlier this year.

Long story short, we're still "range-finding," but now with a more bullish lower boundary for yields.  The lower we go, the more likely we are to encounter it.  Is 1.13% low enough?  Impossible to know right now.  We'll have stronger evidence that the bottom has arrived when we see yields moving quickly in the other direction--especially if they make it back to 1.25% on one or two days of heavy selling.