We came into today expecting some asymmetric risk in favor of the bond market due to the recent tendency to take inflation numbers in stride.  In simpler terms, that meant a report that was near forecasts (or just slightly higher) wouldn't necessarily need to result in bond market weakness, but all bets were off for a bigger beat.  We got the bigger beat (4.5 vs 4.0 core y/y) and bonds can't help but acknowledge it.

The broader market's reaction function is crystal clear.  The notion of economic data as a key market mover is still valid, but data's impact is currently being heavily filtered through the Fed's policy lens.  In other words, "what will the Fed do now in light of this data?"  When reports suggest earlier tapering and rate hikes, stocks and bonds do this: 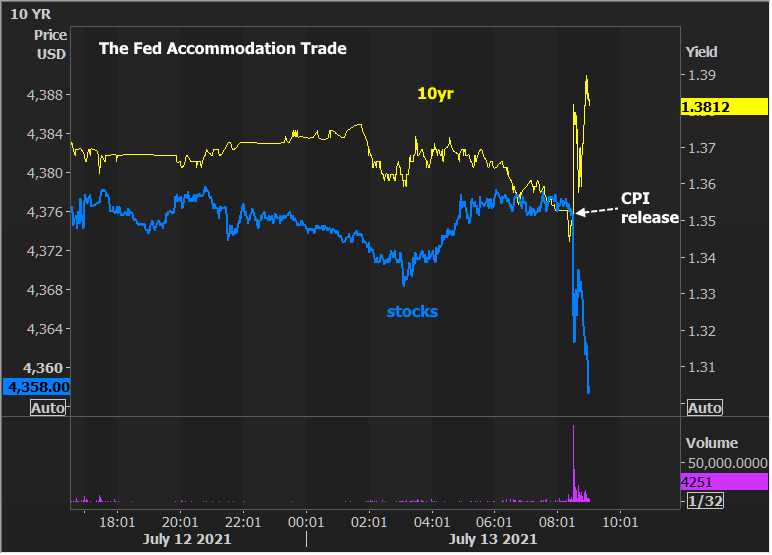 All of the above having been said, the damage is minimal so far and the day is young. 10yr yields have been flirting with a mere 1bp loss in early trading and MBS have been holding roughly 2 ticks (.06) lower.  This places more emphasis on the afternoon's risky event: the 30yr bond auction--or at least more emphasis than before.  Yesterday's 10yr auction suggested bonds may not be waiting on the edge of their seats for the results, but that could have had something to do with the 10yr auction coming in very close to consensus/average stats.