This morning, GDP came out at -4.8%, the lowest reading since Q1, 2009.  The Fed announcement and press conference will be out this afternoon.  But the most interesting development may well be the emergence of the 2.0 30yr fixed UMBS coupon in the secondary mortgage market.

What does that actually mean?

Simply put, a new "bucket" is opening up that allows for 30yr fixed rates as low as 2.25%.  Before you get too excited, that doesn't mean rates of 2.25% are available, and it carries absolutely ZERO implications about their likelihood.  What it DOES mean, however, is that the lending/trading community see 30yr fixed rates of 3.125% and under being prevalent enough for long enough that investors are willing to buy exposure to risks specifically associated with those lower rates.

What are those risks?

The biggest risk of buying the lowest possible coupon is that rates will rise and investors will essentially be stuck holding a rate of return that is well below what the market is currently paying.  This is as uncomplicated as it sounds.  Forget MBS coupons for a moment and just imagine you're investing in one mortgage at  2.875%.  You figure this rate is low enough that your borrower won't rush to refinance if rates move even lower, but it's high enough to offer a decent rate of return in the coming months where you expect rates in a range between 2.625 and 3.625.

Now let's say rates rise faster than you expected and the average rate is around 3.875%.  That means the same principal amount you invested/loaned to earn 2.875% could now be loaned/invested at 3.875%, BUT YOU CAN'T DO THAT because your money is tied up with the borrower paying 2.875%, and they're now highly unlikely to refinance or move because they want to keep that nice low rate. 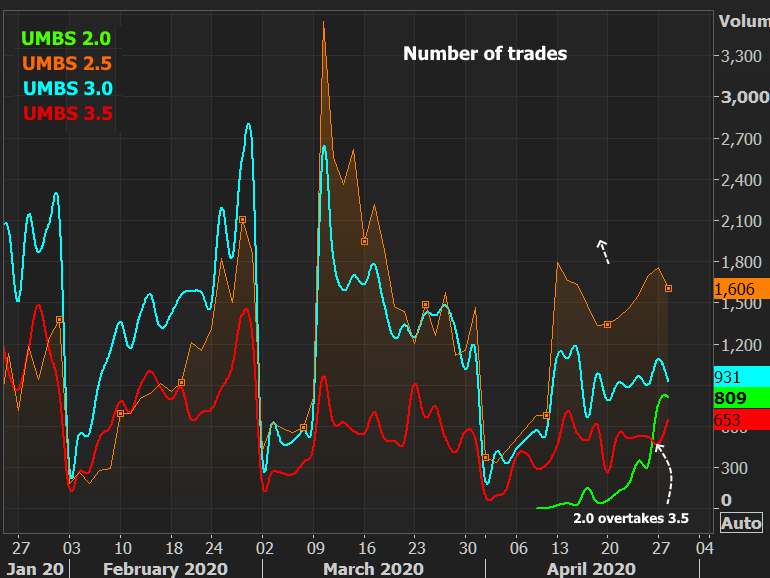 Dollar volume is a slightly different story as there are so many huge pools of 2.5 coupons in circulation.  For instance, while 2.0 coupons are trading half as often as 2.5s, they only comprise about 1/6th of the dollar volume.  Notably though, they overtook 3.5 coupons yesterday.  While those two will likely jockey for 3rd place in terms of dollar volume, the chart above shows that the changing of the guard has already taken place (hence 2.0s earning a spot on the MBS Live dashboard, at the expense of 3.5s). 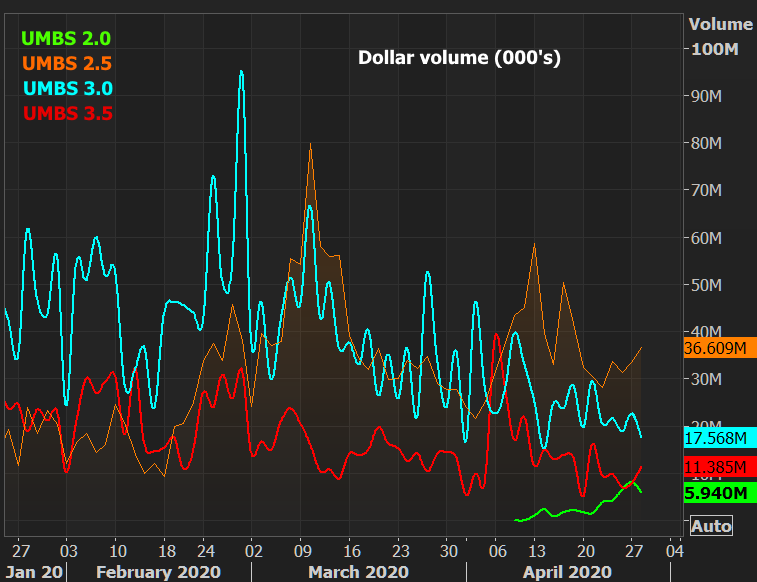 What does it mean for you and your rate sheet availability?

This will vary by lender, but it generally means that the lowest rates on your rate sheets will be better able to respond to improvements in MBS prices.  You may even see some pent-up pricing capacity relaxed in those lower rates.  Why is that?  Because until now, if a lender offered a rate of 3.125% or under, they had to use a 2.5 MBS coupon.  The street valued those coupons based on rates up to 3.625%.  So as rates fell, 2.5s would look like a worse investment in relative terms (due to increased prepayment as consumers with 3.625% rates were more and more likely to refi when rates hit the high 2% range).  A 2.0 coupon has less of that prepayment risk/uncertainty.  Investors know what they're buying and only really have to worry about a big, unexpected surge higher in rates.  Removing the prepayment risk premium allows them to offer better pricing on the lower rates.

This discussion on MBS dovetails into today's key calendar event, the Fed announcement and press conference.  If there's a reason that investors have an extra degree of comfort with respect to rates remaining in the current range, it's the Fed's commitment to ample accommodation throughout the coronavirus recovery.  So unless coronavirus is magically eradicated and the economy manages to leap back into action at a faster pace than anyone expects, the Fed can continue holding its policy rate at 0-0.25% and it can continue engaging in other easing measures like bond market purchases/reinvestments.

We know the Fed will not be adjusting rates today, but we may get an update on its MBS/Treasury buying plans considering the incredibly nimble changes it's made every week since March 15th.  Markets have received that nimble strategy well enough that the Fed doesn't really need to tie themselves down to specific numbers in the long-term, but even a qualitative comment in the Powell press conference will help reinforce the narrative (and hopefully not call it into question).