This week's economic data headliner was this morning's CPI report.  It showed core inflation at 4.9% as expected.  Had the number been 2bps higher or more, traders may have priced in a more hawkish Fed next week.  2bps lower, and traders may have wondered if the Fed might hold off for another meeting.  Bottom line, the as-expected result makes next week's Fed Announcement more of a moving target.  This lowers the overall spectrum of volatility for today and increases it for next week.

By holding ground today, bond yields remain inside a consolidation range that splits the difference between the lower rates associated with the delta variant over the summer months and the higher rates seen since the Fed's hawkish shift in late September. 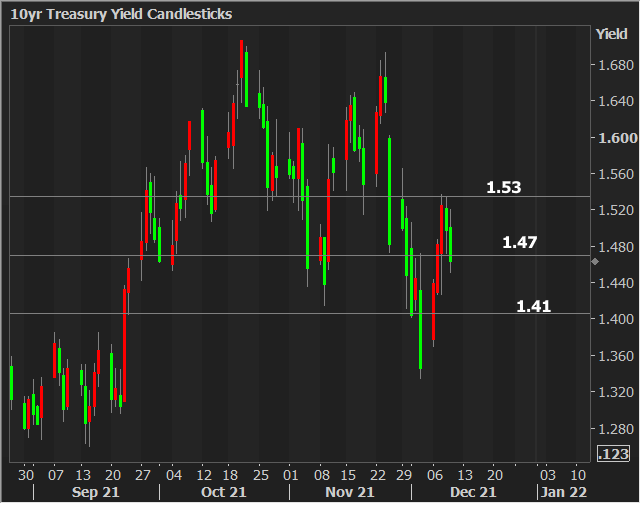 What's at stake for the Fed?  The main debate seems to be whether or not the Fed will accelerate the tapering of its bond purchases by 50% or 100%  For instance, they're currently slated to reduce MBS purchases by $5 billion each month and the acceleration could either bump that number to $7.5 bln or $10 bln.  In either case, the goal would be to conclude tapering in order to be in a position to hike rates sooner.

In other news, MBS charts look weaker than they are due to the roll.