As of last Friday, the bond market looked keen on rejecting any attempt to revisit the recent ceiling in late October (10yr yields were just over 1.70%).  Now this week, we're seeing yields make another run at those highs.

Without considering any fundamentals or correlations with other markets, we can see that 1.52% has been an important pivot point in the past month. It has generally acted as a floor while 1.65 has been the most prevalent ceiling.  But there are some reasons to view floors and ceilings as moving targets.  See the internal trendlines in the following chart (teal lines).  These lines actually capture more floor/ceiling bounces than the 1.52/1.65 pivot points. 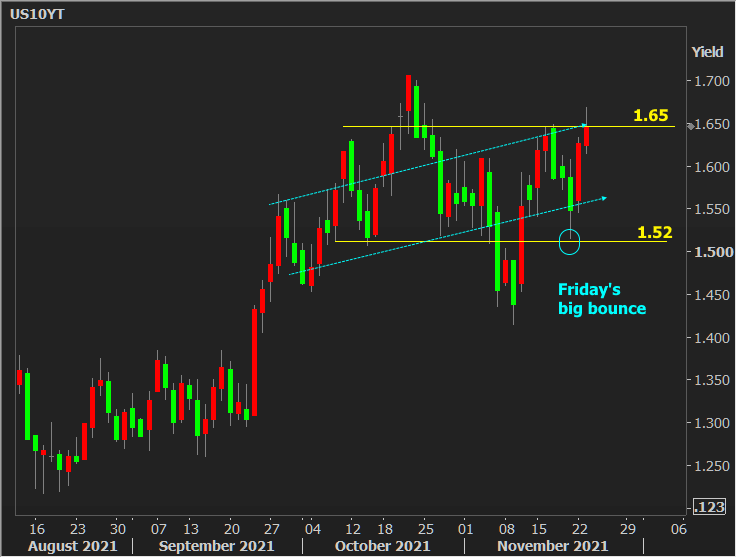 That's a fairly basic drawing, but the point is that the trend may be shifting from "sideways" to "slightly weaker."  To be sure, it's been slightly weaker in the bigger picture, but the recent resilience was increasingly causing us to question the market's willingness to revisit 2021's highs.

As for justifications, European bond market momentum is a popular option. Strength in Europe has been one of the biggest sources of support for US bond market resilience in November.  But now Europe is in the midst of a heavy 2-day sell-off.

The chart below attempts to capture the push/pull.  After the CPI surprise on November 10th, Treasuries were surging higher.  European yields refused to follow.  By the end of last week, the massive European rally forced us to consider October as a possible near-term ceiling for Treasury yields.  But with the first 2 days of this week suggesting an end to the November EU bond rally, it's no surprise to see US yields move back toward recent highs. 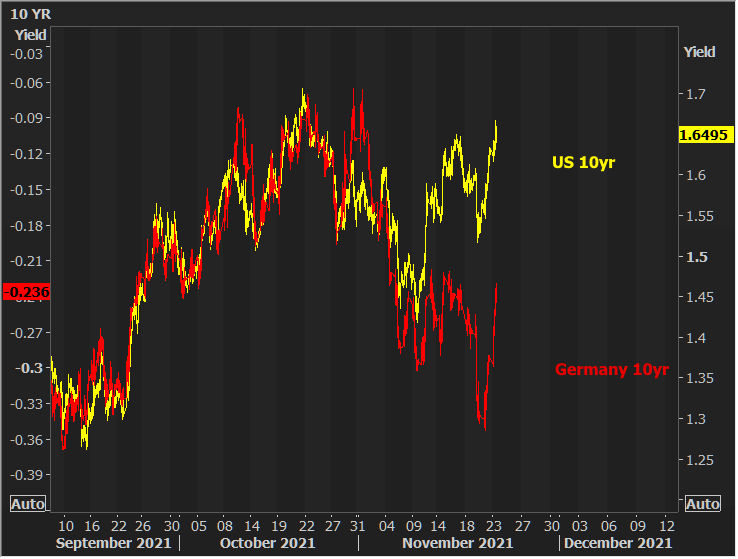 The major caveat to all of this is that it's Thanksgiving week--a time when we try not to draw any far-reaching conclusions due to abnormal liquidity/volume/participation in financial markets.  And even then, much depends on the way the pandemic unfolds over the winter months, both at home and abroad.

As for today specifically, the biggest risk for volatility is the 7yr Treasury auction at 1pm.