MBS Live Morning: Taper Time is Here, But It's Not The Only Market Mover

Any rate watcher who lived through 2013 has not-so-fond memories of the taper tantrum.  (For those of you who weren't tuned in, that refers to the incredibly rapid rate spike that followed the Fed's warning that they would begin winding down their bond buying programs in the coming months).  Because of that precedent the conversation about the next tapering event has been on the table for more than year.  It's grown more serious and timely in the past few months and an official announcement is 100% expected on Wednesday.  In fact, it's so well expected that the week's other big-ticket events may well be the bigger market movers.

Of these, the most obvious candidate would be the perennial favorite: nonfarm payrolls on Friday.  In addition, both varieties of the ISM data (manufacturing and non-manufacturing) are more than capable of causing volatility.

Lastly, it's also worthwhile to think beyond simple cause and effect when it comes to bond market movement.  Or perhaps we should clarify that the worthwhile exercise is to think beyond the traditional inputs (like economic data and Fed policy changes).  Traders certainly trade for other reasons, and they like to run the various plays in their playbook in close proximity to key events.  Indeed, this is one of the reasons that key events are the most reliable sources of volatility even if that volatility doesn't always align with the suggestion of the event itself (i.e. stronger bonds after a stronger jobs report, etc.).

All that to say that, yes, the Fed will announce tapering on Wednesday, but that fact alone does NOT dictate any specific momentum.  If anything, we've already seen the reaction to the taper announcement play out in the past month.  And yes, this also means that bonds are just as capable of rallying by the end of the week as selling off.  If they do rally, it would fuel the fire of a supermassive consolidation pattern that's recently come into focus with the late summer lows and early fall highs. 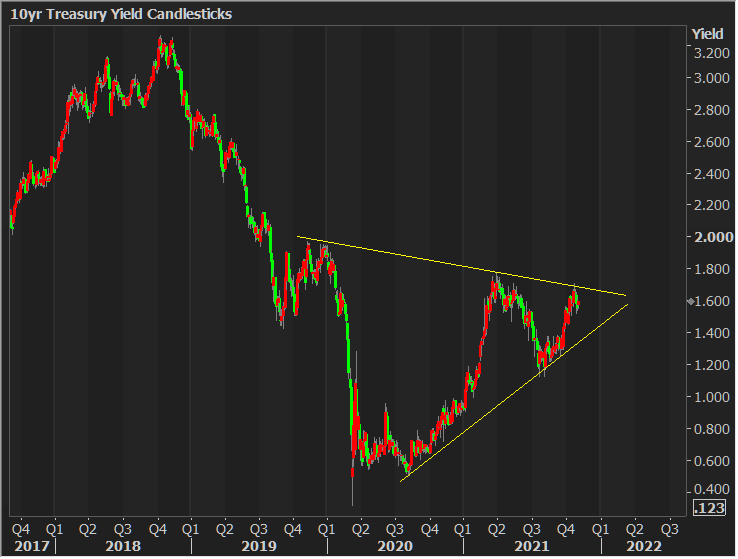