After watching the same consolidation pattern for the past few months and feeling that yields were safely below the upper boundary, that boundary has now been broken! From here, we move on to assess what this means in the bigger picture.  Could it be a prelude to a bounce or simply evidence of accelerating weakness?  Is there another way to look at the general notion of a "ceiling" for rates that would give the current sell-off a bit more room to run?

The 2 main ways to look at the current ceiling would be via the consolidation trend (yellow lines in the chart below) or simply horizontal pivot points.  With respect to the latter, 1.70 had been the level to watch as of yesterday, but it was challenged late in the day and broken in the overnight session today.  Attention now turns to the next line in the sand, 1.77, which comes courtesy of the intraday high yields seen earlier this year. 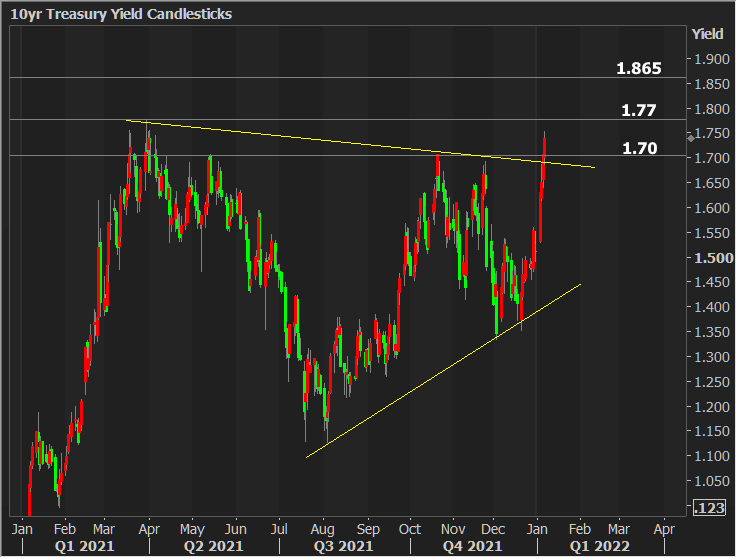 What about bigger pictures?  Where could things ultimately top out?  I was asked this morning if I thought 10yr yields would hit 2.0% in the next few weeks.  Here's how I answered:

Let's focus on what we can know. There is upward momentum in rates currently. It could get worse before it gets better. An endemic phase of covid + a decent economy + the desuetude of Fed support are all consistent with 10yr yields over 2%. We know we have at least one and a half of those things and may be on the way to all 3 depending upon how omicron plays out. I'd put the bigger picture, longer term inflection point--the actually significant technical barrier--at 2.40% as opposed to 2.0%. And I'd hesitate to speculate on whether we hit levels that are more than a quarter of a point away in the space of only a few weeks. Instead, I'd be more willing to think about whether we will challenge 2.40% in 2022. Even then, it still "depends."

As for how we might arrive at 2.40%, it was a highly technical process (not!) consisting of drawing a trough-to-peak line on the last big-picture sell-off and dragging it over to the present. 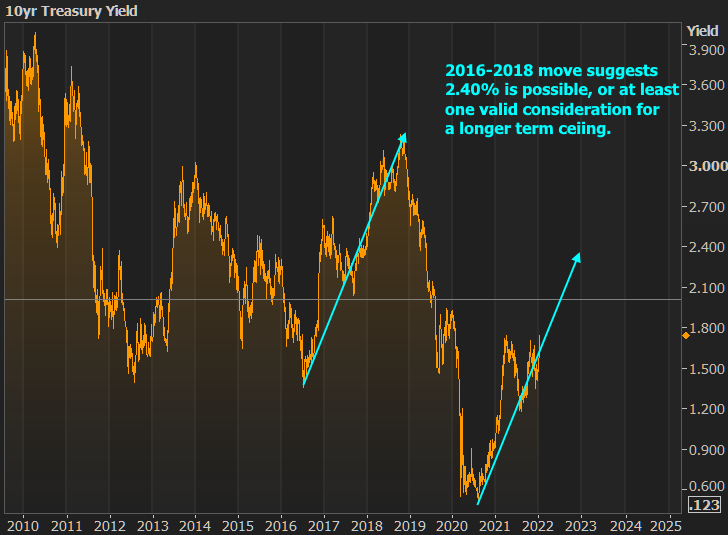 More than anything, this chart is meant to show what's POSSIBLE as opposed to make any prediction about the future.