Spending on residential construction, while down a bit in August and in spite of the gloom and doom about the housing market, continues to run significantly higher than in 2021. This is also true, although to a lesser extent, for construction spending as a whole.

The U.S. Census Bureau put spending on all public and privately funded construction during the month at a seasonally adjusted annual rate of $1.781 trillion, down from $1.794 trillion in July, a month-over-month decline of 0.7 percent. Annualized spending, however, was 8.5 percent higher than in August 2021. For the year-to-date (YTD), spending has totaled $1.184 trillion, up 10.9 percent compared to the first eight months of 2021. 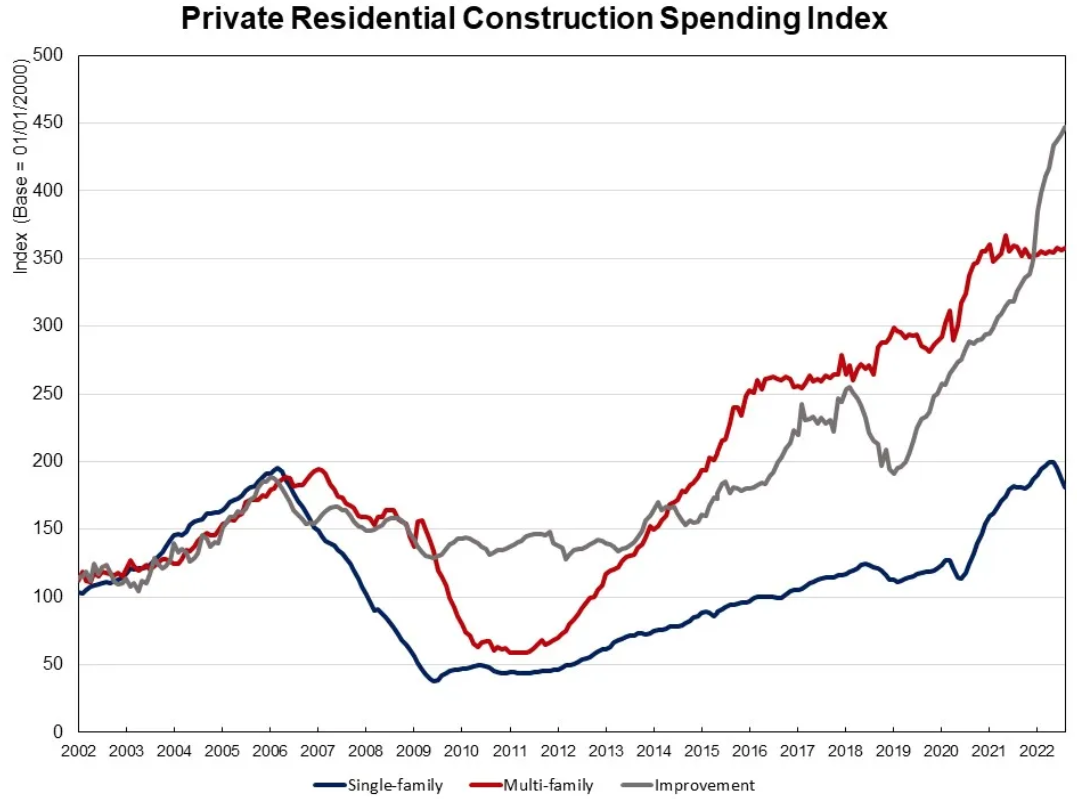 Funding for private construction of all types was at a seasonally adjusted rate of $1.426 trillion in August, an 0.6 percent decline from July, but 9.9 percent higher than a year earlier. On a non-adjusted basis, private projects consumed $129.860 trillion during the month and $952.901 billion YTD. The latter figure is 13.9 percent higher than for the same period in 2021.

Total spending on residential construction, including new single-family and multifamily units and money spent on renovations and remodeling, was at a seasonally adjusted annual rate of $912,913 billion, down 0.9 percent from July and the third consecutive decline. The number was 12.5 percent higher than in August 2021, however, that annual increase has to be attributed to the home improvement sector which was up 37.2 percent from August 2021. Annualized single-family spending fell by 2.9 percent for the month and was nearly identical to that in August of 2021 at $436.308 billion. Multifamily spending was up 0.4 percent for the month and down 0.2 percent on an annual basis.

Seasonally adjusted spending for publicly funded projects was at a rate of $355.315 billion, down 0.8 percent for the month but 3.3 percent above the August 2021 pace. YTD spending is virtually unchanged between 2021 and 2022 at $231 billion.