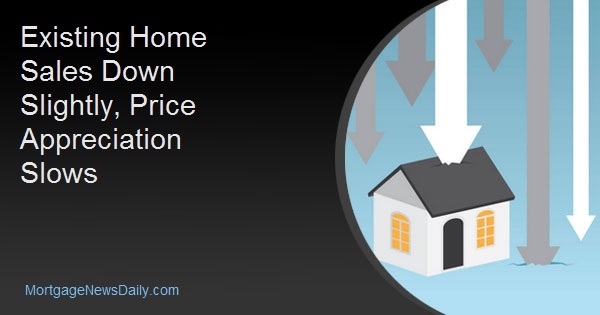 Seven straight months of slowing sales has reduced existing home transactions by nearly 20 percent from the same point in 2021. The National Association of Realtors® (NAR) said on Wednesday that August sales of preowned single-family houses, townhouses, condominiums, and cooperative apartments were at a seasonally adjusted annual rate of 4.80 million units. This is a decline of 0.4 percent from July and is 19.9 percent lower than the August 2021 pace.

There is a bright spot; the size of the August decline, Over the previous three months, existing home sales had fallen an average of 4.7 percent. Sales were also slightly higher than anticipated. Analysts polled by both Econoday and Trading Economics had forecasted sales at 4.7 million

Single-family home sales were down 0.9 percent to a seasonally adjusted annual rate of 4.28 million, 19.2 percent below the level a year earlier. Existing condominium and co-op sales were up 4.0 percent compared to July, but 24.6 percent lower year-over-year.

“The housing sector is the most sensitive to and experiences the most immediate impacts from the Federal Reserve’s interest rate policy changes,” said NAR Chief Economist Lawrence Yun. “The softness in home sales reflects this year’s escalating mortgage rates. Nonetheless, homeowners are doing well with near nonexistent distressed property sales and home prices still higher than a year ago.”

August marked the 126th month of year-over-year price increases, the longest-running streak on record. Price gains, however, are clearly moderating from the record high median of $413,800 posted in June. The median price for existing units of all types rose 7.7 percent year-over-year in August, to $389,500. During the first few months of this year, rate gains exceeded 15 percent. The median existing single-family home price was $396,300, up an annual 7.6 percent. The median existing condo price was $333,700, a markup of 7.8 percent.

Inventory declined to 1.28 million units, 1.5 percent less than the July total and unchanged year-over-year. This is considered a 3.2-month supply at the current sales pace – identical to July and up from 2.6 months in August 2021. Properties typically remained on the market for 16 days and 81 percent of August sales were on the market for less than a month.

“Inventory will remain tight in the coming months and even for the next couple of years,” Yun added. “Some homeowners are unwilling to trade up or trade down after locking in historically-low mortgage rates in recent years, increasing the need for more new-home construction to boost supply.”