Homes are still selling in record time, but affordability and low inventories are driving sales lower. The National Association of Realtor® (NAR) says previously owned single-family homes, condominiums, townhouses, and cooperative apartment sold at a seasonally adjusted annual rate of 4.81 million units, a 5.9 percent decline from 5.12 million in June. It was the sixth consecutive month that existing home sales moved lower and the second month in which the decline was greater than 5.0 percent. Sales trailed the 6.03-million-unit annual rate a year earlier by 20.2 percent.

July’s results were about as expected. Both Econoday and Trading Economics had forecast the annual rate of sales at 4.85 to 4.89 million units.

Inventories are slowly rebuilding from their persistent record lows, but homes are still selling quickly. There were 1.31 million unsold homes at the end of July, an increase of 4.8 percent month-over-month and returning the inventory back to its level in July 2021. Those listings are estimated at a 3.3-month supply at the current monthly sales pace compared to a 2.9-month supply in June and 2.6 months a year earlier.

Still, NAR says properties typically remained on the market for 14 days in July, unchanged from June and the shortest marketing period since NAR began tracking the stat in May 2011. Eighty-two percent of homes sold in July 2022 were on the market for less than a month. 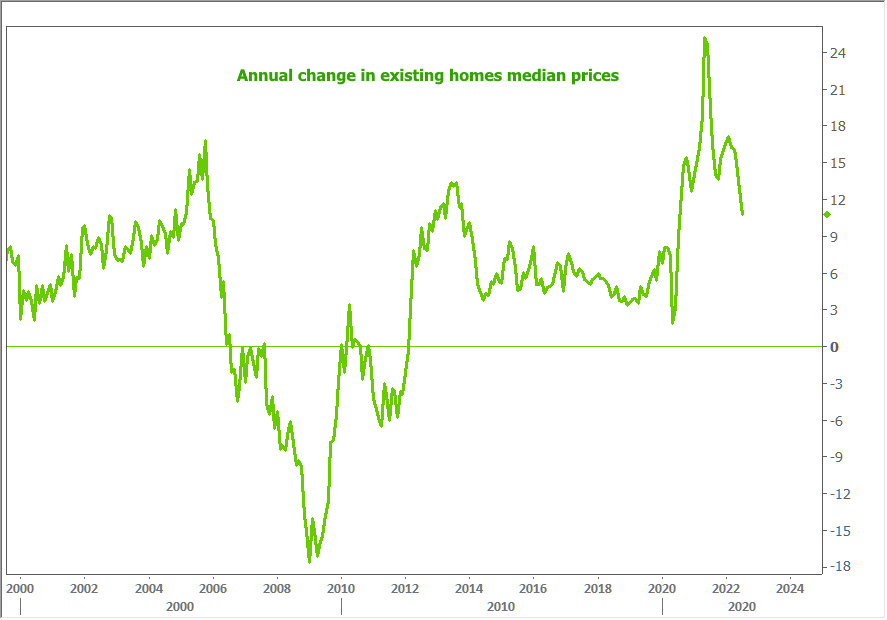 "We're witnessing a housing recession in terms of declining home sales and home building," Yun added. "However, it's not a recession in home prices.” He said the tight inventory means nearly 40 percent. of homes are still commanding the full list price.

First-time buyers were responsible for 29 percent of sales in July and individual investors or second-home buyers purchased 14 percent. All-cash sales, many of them investors purchases, accounted for 24 percent of transactions during the month.

Sales were fell from both June and the prior July in all four major regions, although price appreciation continued at high levels. Existing-home sales in the Northeast slid 7.5 percent to an annual rate of 620,000, a 16.2 percent annual decline. The median price was $444,000 reflecting 8.1 percent year-over-year growth.

Yun said, "The action is in the pricey West region which experienced the sharpest sales decline combined with a sizable inventory increase. It's likely some Western markets will see prices decline, and that will be welcome news for buyers who watched rapid price jumps during the past two years."