What a difference 4 months make!  In April, the National Association of Homebuilders (NAHB) recorded a Housing Market Index (aka "builder confidence") of 77.0.  While that was off the recent peak, it was still higher than anything else before the pandemic going all the way back to 1998, and the 2nd highest pre-pandemic level since record keeping began in the mid 80's.

Homebuilding headwinds are well known at this point.  They include things like shortages of materials and labor, but those factors alone weren't enough to put much of a dent in confidence.  It wasn't until they were joined by a rapidly rising rate environment colliding with 2 years of record-setting price appreciation that confidence really began to plummet.

In and of itself, price appreciation isn't necessarily a bad thing for homebuilding.  If it's moderate and stable, it can actually contribute in a positive way.  But 2 straight years of 20% price appreciation had already taken a toll on affordability even before 2022's rate spike.  When rates jumped at one of the fastest paces on record in the first half of the year, it added up to rapid cooling of what had been an arguably unhealthy frenzy of homebuying demand.  A vast majority of builders cited the rate spike as having the biggest impact on buyer demand.

Unsurprisingly, the portion of the homebuilder confidence index tracking present-day buyer traffic is leading the way to long-term lows.  Whereas the overall headline (which includes things like the 6 month outlook and present level of home sales) is still more than 4 points above 2014's lows, the buyer traffic component is only 1 point higher--effectively back to 2012's levels. 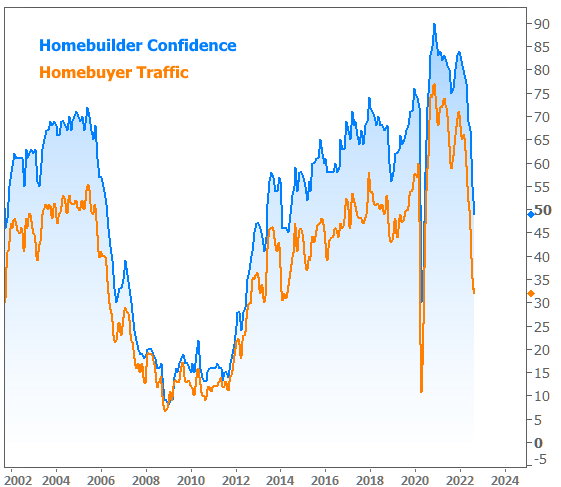