The Mortgage Bankers Association (MBA) released its latest mortgage application numbers this morning and the modest movement belies the drama unfolding in the world of mortgage rates.  As usual, the MBA does a good job of capturing average rate movement week to week and they correctly identified last week's big spike to the highest levels since the first half of 2019.

Despite the surge, mortgage applications didn't respond in a major way.  Refi applications only fell 3% from the previous week.  Purchase applications actually managed a small uptick of 1% after last week's more substantial 9% improvement.  But context matters.

As seen in the following chart, refi applications have declined massively from Summertime highs and even more massively from the high levels at the beginning of 2021.  MBA notes this week's tally is 49% lower than the same week last year.  The news is less dire on the purchase side.  Applications are still lower than most of the past few months, but higher than most of the late summertime months from 2021.

(NOTE: the mortgage rate portion of this chart is MND's daily rate data.  To view MBA, MND, and Freddie Mac rate data all on one chart, bookmark this page: https://www.mortgagenewsdaily.com/mortgage-rates/30-year-fixed ). 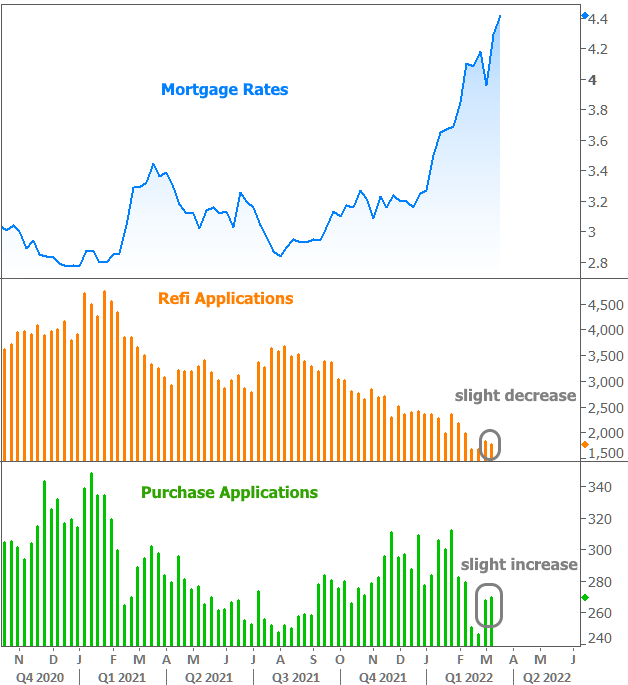 Speaking of context mattering, a longer term chart of the same data really helps put the magnitude of this most recent rate spike into perspective.  It's not an exaggeration to say it's now the sharpest move higher that any of us have seen in more than a decade (the overall size is about the same as 2016-2018, but this one has happened in roughly 6 short months... not only that, but 2016-2018 was really a 2-parter). 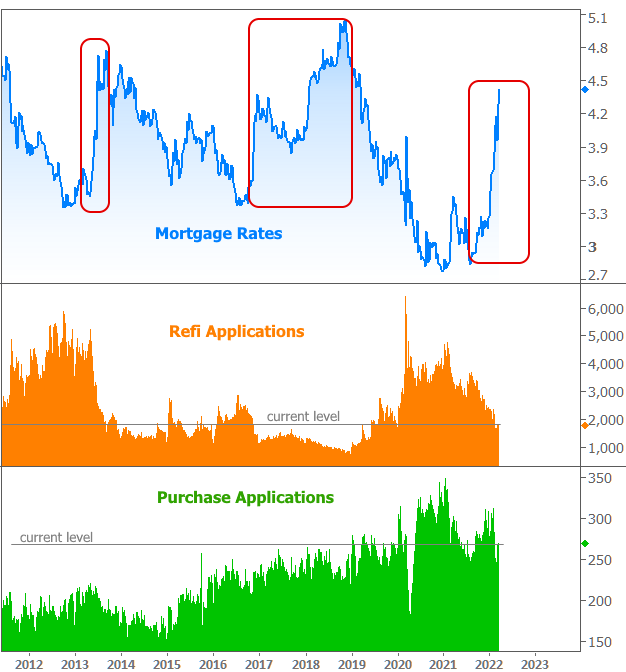 The other takeaways from the chart include the notion that the purchase market is still firing on all cylinders relative to most of the past decade (even then, we can responsibly conclude it would be even higher if not for the low inventory situation) and that refi demand doesn't have much farther to fall before hitting the historical bottom.  In fact, due to the immense equity build-up of the past 2 years, the doldrums of 2017-2018 may not be a relevant baseline this time around.

Other highlights from the report: