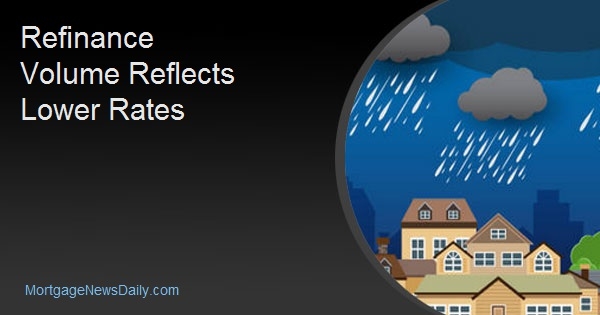 Overall mortgage application activity returned to pre-holiday levels during the first week of the new year. Lower interest rates bolstered refinancing and the Mortgage Bankers Association said its Market Composite Index, a measure of mortgage loan application volume, increased 1.2 percent on a seasonally adjusted basis from one week earlier. On an unadjusted basis, the Index was up 48 percent compared to its December 30 level.

The Refinance Index rose 5 percent from the previous week but was 86 percent lower than the same week one year ago. Refinancing accounted for 30.7 percent of applications during the week, up from 30.3 percent the previous week.

The seasonally adjusted Purchase Index dipped 1.0 percent compared to the prior week but was 47 percent higher on an unadjusted basis week-over-week. Purchase loan activity was 44 percent lower than the same week one year ago.

“Mortgage rates declined last week as markets reacted to data showing a weakening economy and slowing wage growth,” Joel Kan, MBA’s Vice President and Deputy Chief Economist said. “All loan types in the survey saw a decline in rates, with the 30-year fixed rate falling to 6.42 percent. Purchase applications continued to be hampered by broader weakness in the housing market and declined slightly over the week, with the index slipping to its lowest level since 2014. There was an increase in refinance activity as a result of the 16-basis-point decline in rates, as both conventional and government refinance applications increased. However, the overall pace of refinance applications was lower than November and December’s 2022 averages, and over 80 percent lower than a year ago. Refinances were about 30 percent of all applications last week — well below the past decade’s average of 58 percent.”