The National Association of Home Builders (NAHB) says that, after a few months of moderating lumber prices following the rapid runup in early spring, those prices are soaring again. In a recent post on its NOW blog, the association says this is again disrupting the housing market and impacting affordability.

According to the post, lumber prices have nearly tripled over the past four months, causing the price of an average new single-family home to increase by more than $18,600. The increases have also added nearly $7,300 to the market value of the average new multifamily home. This translates into a $67 per month bump in rent for a new apartment.

NAHB quotes Random Lengths’ report that, as of Dec. 29, the price of framing lumber topped $1,000 per thousand board feet. This is a 167 percent increase since late August. 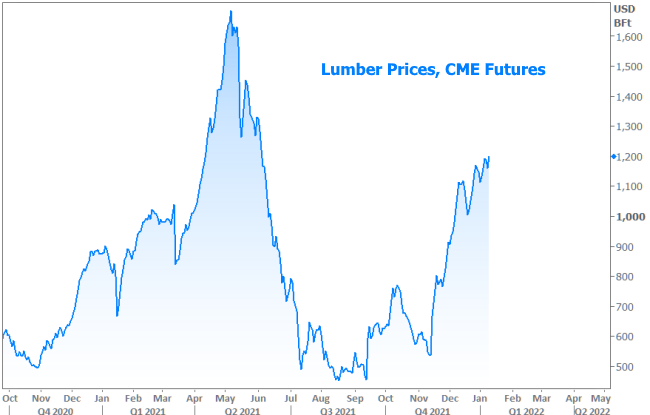 The per home increase is based on the softwood lumber that goes into the average new home. This includes any used in structural framing (including beams, joists, headers, rafters, and trusses), sheathing, flooring and underlayment, interior wall and ceiling finishing, cabinets, doors, windows, roofing, siding, soffit and fascia, and exterior features such as garages, porches, decks, railing, fences and landscape walls.

According to NAHB the lumber price volatility dates back to the beginning of the pandemic in Spring 2020. Sawmills curtailed production in anticipation of reduced demand, but when it because apparent a few months later that housing was faring much better than anticipated and demand remained strong, mills did not ramp up production accordingly. “The slow reaction by sawmills, combined with massive uptick in demand from do-it-yourselfers and big box retailers during the pandemic resulted in lumber prices peaking at a record-shattering $1,500 per thousand board feet in May 2021, before beginning a gradual decline through late August,” the post says.

This most recent lumber price upsurge is due to several factors, including:

NAHB says it has worked with the White House, Congress the U.S. Commerce Department, and the Canadian embassy, urging them to resume talks to negotiate a new softwood lumber trade agreement between the two countries. NAHB Chairperson Chuck Fowke has also testified before Congress, calling on them to “uncork supply chain bottlenecks” that are making the housing affordability crisis worse.