Stunning Round Trip For Mortgage Rates After Inflation Data

There was no way to be sure what the effect of today's economic data would be on mortgage rates.  All we knew is that the Consumer Price Index (CPI) would be released at 8:30am ET and that CPI releases have been the biggest sources of volatility for interest rates in 2022 and especially since June.

If you're wondering what CPI has to do with mortgage rates, here's a quick run-down:

Case in point, the following chart shows the market's expectations for the Fed Funds rate, both at the December 2022 and June 2023 Fed meetings.  CPI reports have been at ground zero for most of the big moves. 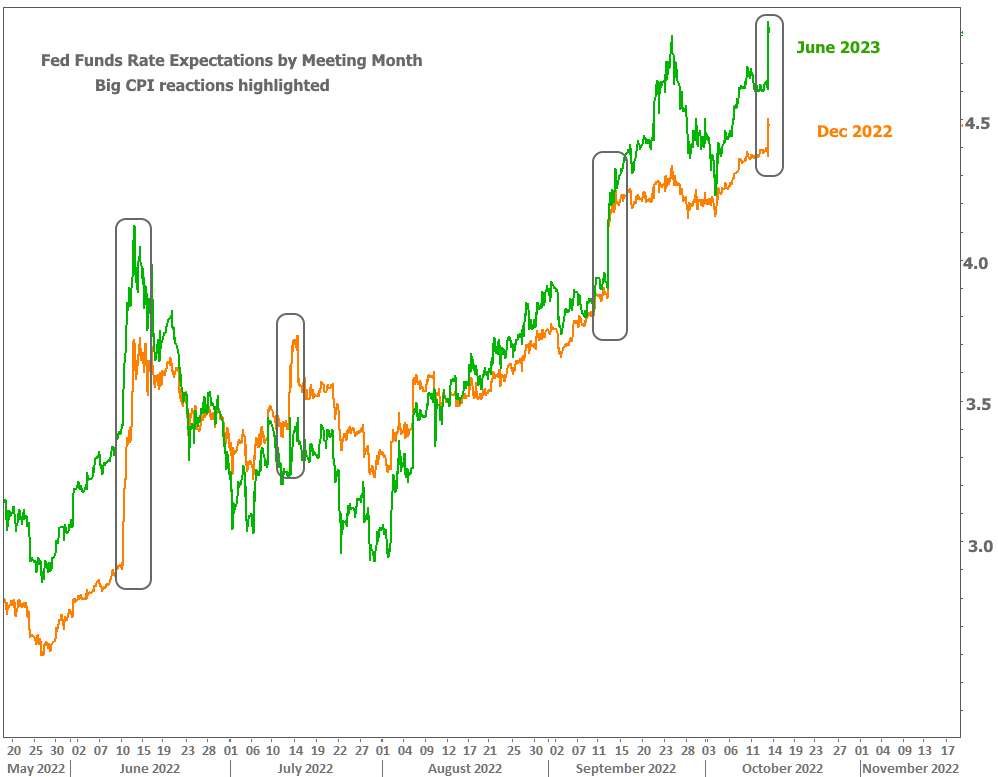 As we often like to remind our readers, the Fed Funds Rate is not the same as mortgage rates, but longer-term Fed rate hike expectations (which is what's in the chart above) correlate much more readily with longer-term consumer rates such as those for mortgages.  At the very least, big moves tend to be big moves in either case.

The same correlation held true after this morning's CPI came in hotter than expected.  In other words, mortgage rates surged to new 20 year highs this morning.

Now, you may be wondering why higher inflation is such a surprise if all anyone seems to be talking about on the topic of inflation is how damn high it is.  But when it comes to the bond market, traders have long since priced in everything that was already known and assumed about inflation.  Today's CPI data brought NEW information to light.  If CPI had been right in line with the average economist's forecast, it may not have garnered much of a response from the market.  But it came in higher than forecasts, and that was a rude awakening for bonds.

In addition to simply forcing an adjustment to even higher inflation expectations, by coming in hot, today's CPI also pushes back the moment at which the clock starts ticking on the 2-3 months worth of economic data that will eventually suggest a turning point for economic growth and inflation.  In this sense, it's possible that the market was secretly hopeful that today's data would be tame enough to allow traders to be more receptive to future reports that conveyed lower inflation.

As it stands now, if the next CPI report is much lower, it will be viewed as a one-off until the following month corroborates the story.  There's no magic rule that says rates can't go lower without that trend toward lower inflation, but there's a very real, very non-magical rule that says it's highly unlikely that rates would go substantially lower as long as inflation remains at current levels. Conversely, if inflation continues surprising to the upside, rates are more likely to continue higher.

"Continue higher" is exactly what rates did at first, but then the magic happened.  Without an overly satisfying explanation, bond traders began buying the newly cheaper bonds with yields at their highest levels in more than a decade (bond prices move inversely with yields--the less you pay for a bond, the higher the yield, all other things being equal).  Such a recovery typically relies on some discrete, overt explanation, but in this case, the best we can do is to relay anecdotes from traders and market participants regarding longer-term bonds reaching levels that were/are high enough to attract solid buying demand.