Don't Trust This Week's Mortgage Rate Headlines! (Except This One)

Most of the following is an updated version of the same coverage from yesterday.  Little changed today apart from the big jobs report pushing rates higher yet again.  This only exacerbates the problem addressed in yesterday's commentary.

Without a shadow of a doubt, the average lender's mortgage rates are noticeably higher this week versus last week, with Friday being the worst of the bunch.  Despite that fact, there were multiple news stories this week regarding a massive DROP in rates.  What's up with that?

Before we continue, you may wonder who you can trust if you're getting two entirely different stories.  Thankfully, you can trust both stories!  The one about lower rates simply needs some qualification.

This week's misleading headlines are invariably a result of Freddie Mac's weekly mortgage rate survey.  This is the longest-running and one of the most highly regarded records of interest rate movement over time.  A majority of news organizations rely on it as the primary source for their once-a-week coverage of rates.

During more normal times, this strategy is good enough. The mainstream consumer of financial news doesn't particularly need a new update on rates every day (unless they're home shopping). And Freddie's data does a great job of capturing the broad, long-term trends in rates.

Unfortunately, it does a terrible job of capturing rate changes when bonds are experiencing high volatility, especially if that volatility occurs during the last 3 days of the week.

The most basic level: Freddie reports its survey results on Thursday, but collects most responses on Mon/Tue.  This means news outlets are really reporting a Mon/Tue rate versus last week's Mon/Tue rate.  If there's big rate movement on Wed-Fri, the headlines may suggest rates made a big move in one direction when they actually did the opposite.

The more detailed level (skip to "MBS Prices" if you're satisfied with the basic level): Freddie sends the survey out on Monday morning, and receives a majority of responses within 24 hours.  It continues to accept responses through Wednesday although daily rate data suggests Wednesdays have almost no impact on the result. Results are not published until Thursday morning.

This creates an obvious problem: by the time rates are reported on Thursday, they may significantly higher or lower than they were at the beginning of the week.  The problem is compounded with the previous week saw volatility in the other direction.

For instance, if last week's rates were high on Mon/Tue, then plummeted on Wed/Thu, the Freddie survey would record a result that is far too high.  Then in the present week, if rates were simply unchanged at the beginning of the week, Freddie's survey would show a big drop from the previous week.  From there, if rates spiked again, by Thursday, rates could be significantly higher than they were on the previous Thursday.  At the exact same time, hundreds of news organizations and social media posts would be blasting out headlines about "much lower rates."

Mortgage rates, as offered by mortgage lenders, tend to only be updated 1-3 times per day, depending on market volatility.  But the bonds that determine mortgage rates (mortgage-backed securities or "MBS") move constantly.  Charting that movement shows us the real-time forces affecting rates.  The only catch is that MBS prices move inversely from rates.  For example: 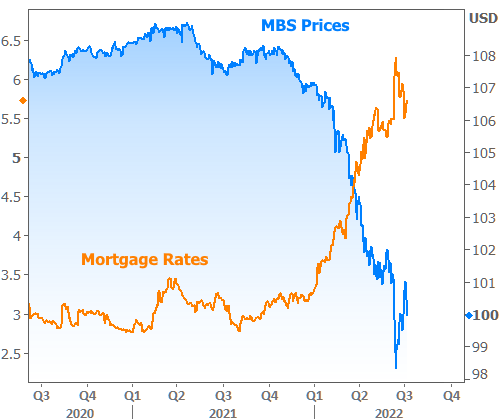 With that in mind, let's drill down on MBS price movement over the past few weeks to uncover the big issue with Freddie's rate survey. 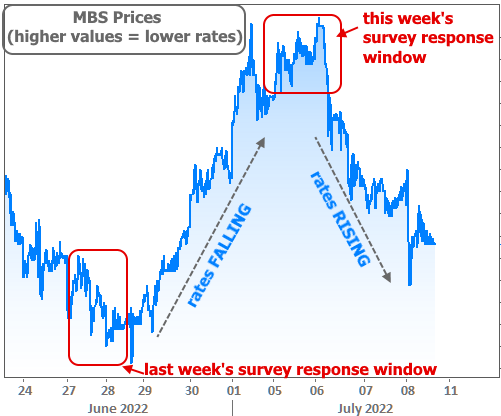 Bottom line on mortgage rates: the timing of the past 2 Freddie surveys was as bad as it could have been with respect to painting a misleading picture of reality.  It resulted in headlines proclaiming a near-record weekly drop in mortgage rates on Thursday--the same day that rates were already noticeably higher than most of the previous week.

In this week's other economic news, we can see some of the data responsible for the upward pressure on rates.  In general rates move higher when economic data is stronger than expected (with expectations based on economists' forecasts).

There were two big ticket economic reports this week: Wednesday's report on the health of the services sector and Friday's official jobs data.  Both were stronger than expected.  The following chart shows 10yr Treasury yields, which correlate well with mortgage rates. 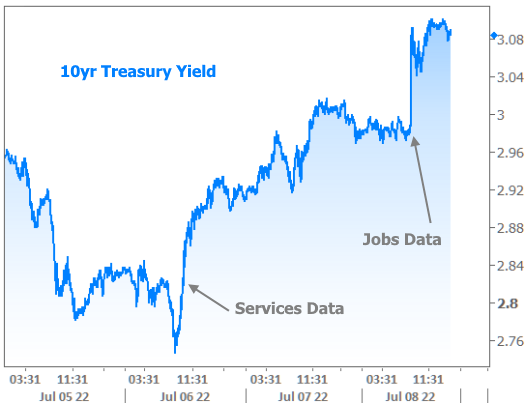 While these reactions were clear enough, next Wednesday brings the potential for a much bigger reaction.  That's when the next installment of the monthly Consumer Price Index (CPI) is released.  Whereas the jobs report is traditionally the most important economic report for rates, CPI is currently far more important because it is the most widely-followed inflation index in the US (and inflation is the driving force behind the massive rate spike in 2022).

Markets are going into next Wednesday with an open mind.  CPI is the biggest game in town, but it's not the only game.  To use a timely example, the services sector data mentioned above (technically the ISM Non-Manufacturing Index) also has a "prices paid" component.  This is one of many ways market participants follow price trends.  Clearly, prices are still very high, but like several other economic reports, the trend suggests a potential shift. 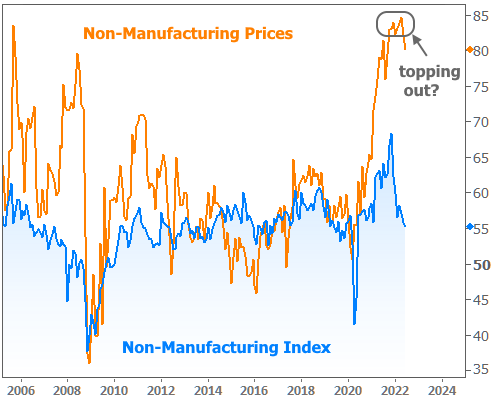 All that to say that investors aren't heading into the big CPI data with an agenda to push rates higher or lower.  The market is nimble at current levels and should react in a relatively logical manner.  Specifically, a big drop in inflation would almost certainly push rates lower, while a marked increase could easily send us back up to the recent highs.