No, Mortgage Rates Are NOT LOWER Today!

In other words, whether we're looking at today's rates versus yesterday, the end of last week, or simply on a week-over-week basis, they're HIGHER.

Whose rates?  Pretty much every lenders'.  I don't see any exceptions to the above across the scores of rate sheets I review every day to generate the MND rate index.  Those rate sheets cover 95% of the market, conservatively.  More importantly, as long as you understand that mortgage rates are primarily based on the value of mortgage-backed securities in the secondary market, this is just simple math.  Today's MBS prices are lower than any of the previous 4 business days (lower prices = higher rates). 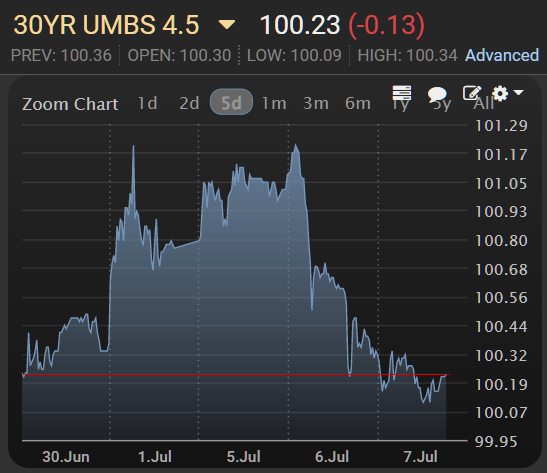 Now For the Big Question: Why are there so many headlines in the news regarding a massive drop in mortgage rates?

Answer: Far too many reporters rely on Freddie Mac's weekly mortgage rate survey as their single source of mortgage rate information.  During more normal times, this strategy is good enough.  The mainstream consumer of financial news doesn't particularly need a new update on rates every day (unless they're home shopping).  And Freddie's data does a great job of capturing the broad, long-term trends in rates.

Unfortunately, Freddie's survey data does a terrible job of capturing rate changes when bonds are experiencing abnormally high volatility.  In fact, the survey is even prone to getting tripped up by average volatility on weeks where most of the movement takes place on Wed-Fri.

To understand why that is, we first must consider that Freddie sends the survey out on Monday morning.  It accepts responses through Wednesday and publishes the results on Thursday.  This is a problem for a few reasons.  First, there is no additional weight given to Wednesday's responses (e.g. if 1000 people say rates are 6.0% on Monday and 1000 people say they're 7.0 on Wednesday, Freddie's survey rate would be 6.5 even though 6.5 is no longer available).

The biggest problem is the timing of responses.  Freddie doesn't publish the specific breakdown, but as someone who pulls rates from multiple lenders several times a day and who has scrutinized the average changes in rate sheet offerings for more than a decade now, I can confidently assure you a majority of Freddie's responses are received on Monday, and a minority are received on Wednesday.  Conversations with lenders who participate in this survey confirm this.  Their logic is... logical--something to the effect of "I respond when I get the email."  And again, the email goes out on Monday.

The net effect is that Freddie Mac's weekly rate survey is more like a "Monday vs Monday" Rate Survey.  That wouldn't be too bad if the results were released on Monday, or if the entire industry didn't rely on it as the most authoritative rate benchmark, or if the news media didn't quote it as gospel, or if it actually serves a regulatory role in determining the test for high cost mortgages, or...

To make matters slightly worse, the survey includes an interest rate and a "point" value that refers to upfront costs (or what consumers might know as "discount points").  The actual definition of "points" seems a bit too open to interpretation depending on the the source, but the point (pun intended) is to represent rates as they exist in the wild: in 2 distinct parts consisting of an upfront cost and a cost over time.

All rates have an upfront cost whether you cans see it or not.  Most borrowers have the option to pay higher upfront costs in exchange for a lower rate.  A bona fide discount point is that upfront cost that actually affects the interest rate.  The problem with including points in a rate survey is that no one pays nearly as much attention to that as they do to the headline interest rate.  This is particularly problematic at times when volatility in the bond market changes the normal relationship between points and rate.  For instance, a single discount point historically equates to roughly 0.25% in rate.  But in mid 2022, there are multiple scenarios where a point equates to more than 0.50% in rate!

What does this "points" business mean when it comes to mortgage rate headlines?

In not so many words, it means that Freddie's rate survey could show a 30yr fixed rate of 5.3% with 0.8 points, when the "no points" rate is closer to 5.8%.  And while this is not happening at present, it also means that a big shift in lender rate quoting behavior could make it look like rates haven't moved very much even though they have.

For example, if lenders were hypothetically quoting 5.625% with 0.4 points on one week and then 5.625% with 0.9 points the following week, news outlets would say that mortgage rates haven't changed when the apples to apples comparison would look more like 5.875% with the original 0.4 points.

"Points" are not the big issue this time around, thankfully, although they are generally making Freddie's rate index look a lot lower than the MND index (which factors the cost of points into the rate itself, thus providing a constant apples to apples comparison).

The big issue is the "Monday vs Monday, but reported on a Thursday" thing.  Here's why: 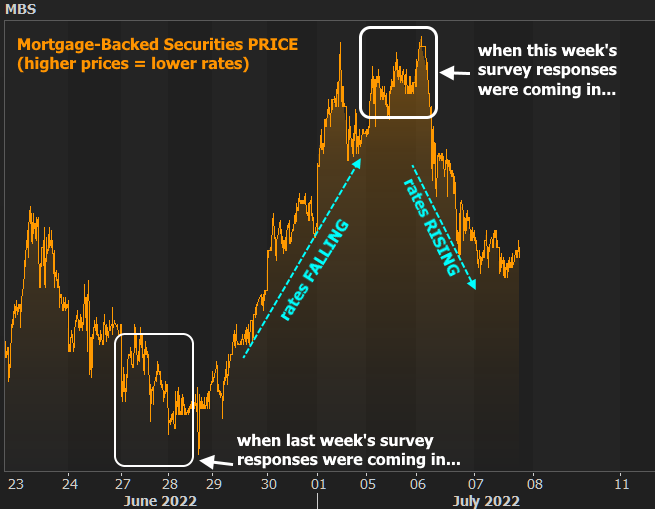 Super duper bottom line: rates absolutely fell between June 27/28 and Monday of this week, but they've been rising relatively quickly since then.  As of Thursday, rates are HIGHER than they were last Thursday and much higher than they were at the beginning of the week.

As always, we publish a continually updated chart of MND's rates as well as Freddie's and MBA's at the following link: https://www.mortgagenewsdaily.com/mortgage-rates/30-year-fixed