There hasn't been much to get excited about when it comes to mortgage rates in the month of March--at least not in a positive way.  Negative excitement has been in no short supply, however, as the average 30yr fixed rate effectively hit 5% on Friday and Monday.  That drama and the reasons for it are well documented in my recent rate coverage.  Today we're here to talk about things moving back in the other direction.

The past 2 days have been the best 2 days for rates so far this month.  In fact, they're really the only 2 consecutive days where rates have dropped by any meaningful amount.  But as the trauma of the 2022 rate environment has likely conditioned you to expect, there is a bit of a catch.  This one is pretty simple and it's important to the rest of the discussion. It has to do with the fact that rates, stocks, gas prices, and whatever else you want to measure in the financial market are all always more capable of experiencing bigger moves in one direction when they've been moving almost exclusively in the other direction at an uncommonly fast pace.

In other words, yes, these are the best 2 days of the month for mortgage rates, but not only was there not much competition, the gains only make today the 4th worst day for rates since late 2018 as opposed to the previous 3 days which occupy the top three slots. 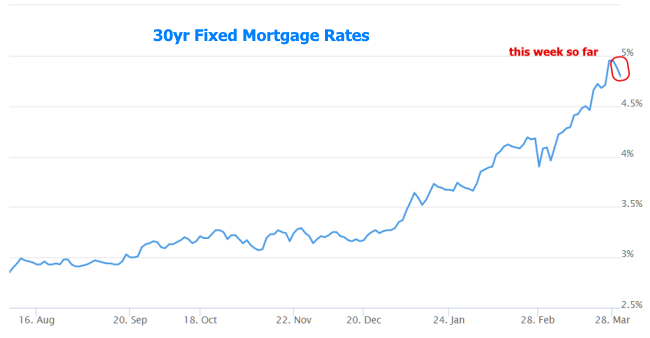 Journeys start with single steps though, and that brings us to the big question: are these merely the first few steps of a bigger journey toward even lower rates?  Anything's possible, but there's no way to know if that's what's happening yet.  In fact, about the best we can do in terms of discussing a future outlook is to look for evidence that the strong upward momentum in 2022 has leveled off.  And while this week's strength could be sowing the seeds for such evidence, it would take several more days of similar strength to even begin to confirm it.

Bottom line: the average lender is now between 4.75% and 4.875% for top tier conventional 30yr fixed rates.  We can hold out some hope that this is a sign of stability, but we should avoid complacency in expecting that stability to continue.