Rates Catch a Break. Will it Last? What's The Impact on Housing?

The biggest story for the mortgage and housing market so far in 2021 has been the big spike in mortgage rates.  It has been more abrupt and covered more ground than all but the worst historical examples.  That said, it was always going to happen when the covid outlook improved.

For something that was "always going to happen," the rate spike still managed to catch many people off guard.  The biggest reason for that was the disconnect between mortgage rates and the bonds that typically dictate mortgage rate movement.

There are actually two types of bonds that affect mortgage rates: Treasuries in a general sense, and mortgage-backed bonds specifically.  To make a long story short, the pandemic resulted in an unprecedented breakdown in the normal correlations between bonds and rates.

The simplest way to think about the breakdown is that lenders simply couldn't keep up with demand and higher rates helped to slow things down.  This also bolstered profit margins heading into an uncertain era of profitability due to mortgage relief programs in the CARES Act.

In visual terms, this created a huge blowout whereby mortgage rates remained MUCH higher than the bond market suggested.  We warned on multiple occasions that this was temporary (especially HERE in December), and that if the reconnection with the bond market coincided with additional bond losses, it would be a fairly nasty double whammy for mortgage rates.  Unfortunately, that's exactly how things have played out. 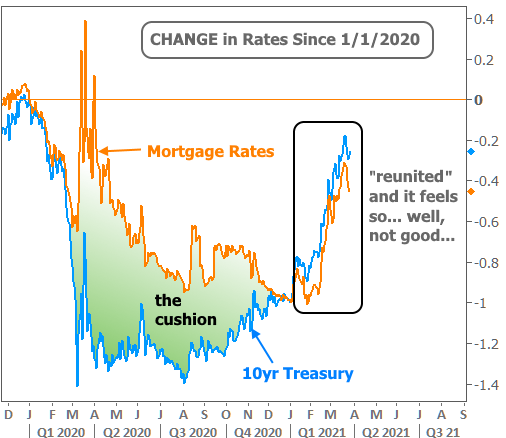 Considering the size and scope of the rate spike, public awareness has been slow to set in.  That's actually the norm.  One big issue on that front is the over-reliance on rate benchmarks like Freddie Mac's weekly survey, which unfortunately lags well behind reality when things are moving quickly.  A vast majority of large media outlets use that survey data to report on mortgage rate movement for the week.

Up until last week, the survey based data was vastly under-representing the true pace of rising rates.  Things are a bit different this week.  We actually had a moderate recovery in rates on the first 4 days of the week while Freddie's survey data continued getting caught up with the persistent move higher. 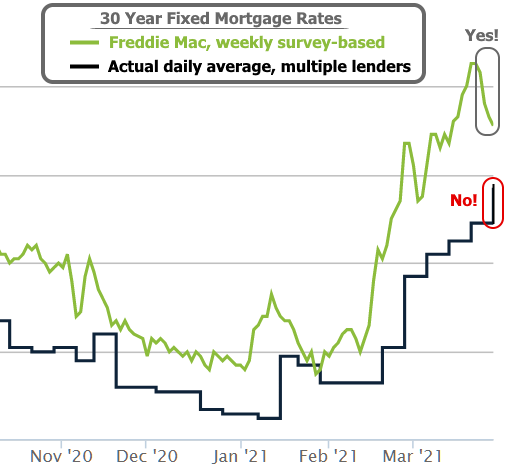 Be careful about assuming that this is some sort of "top" for rates.  While that's a possibility, it's equally possible we're just leveling off before rates decide where to go next.  History provides some good context as to how much ground can be covered in these rising rate environments.

It's more than fair to wonder what sort of impact the rate spike is having on the housing market, but the answer is much more complex than the question.  For instance, we could look at the housing data that came out this week and conclude that activity has cooled off thanks to higher rates. 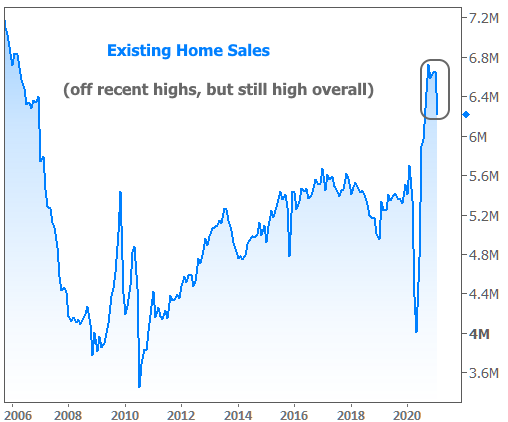 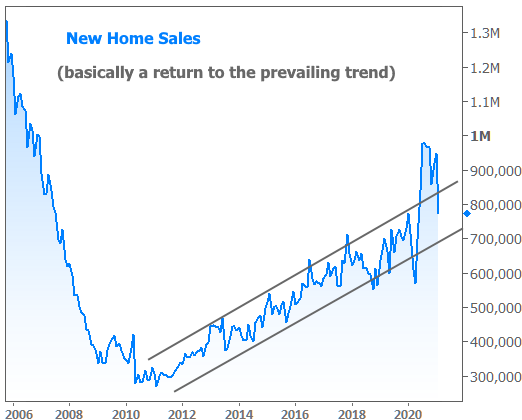 While past examples suggest rates have some impact on the purchase market, it's almost never this abrupt, and it's never enough to cause a reversal in prevailing real estate trends--not by itself anyway.

In the current environment, inventory is just as much of an issue as anything--and probably a bigger issue than rates when it comes to explaining the recent slide in sales figures.  Case in point: consider the complete absence of inventory building in January and February--something that happens with extreme reliability over the years. 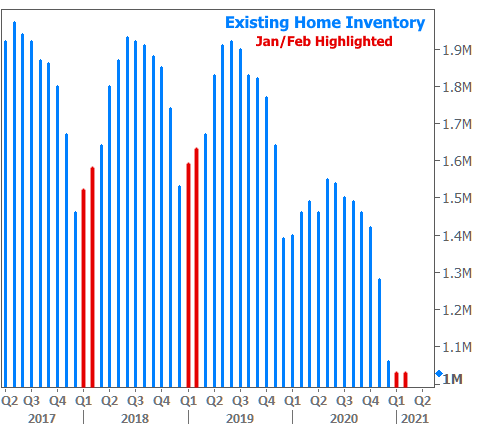 In the week ahead, markets will continue to focus on covid-related statistics where solid domestic progress has been offset, somewhat, by a resurgence in Europe.  Some traders are also waiting to see if Spring Break leads to a domestic resurgence.

It is also "month/quarter-end" and that can create huge trading needs for big money managers.  Some analysts have suggested these money managers will be big buyers of bonds (which could help rates move lower) while others are more focused on Japan's fiscal year end (Japan is a big buyer and, more recently, a big seller of US Treasuries--something that has added upward pressure on interest rates in March).

Either way, the coming week and month promise to settle bets as to whether or not rates will take a break from recent drama or continue setting new longer-term highs.  Granted, when long term highs are still in the "low 3's," it's hard to be too upset, but everything's relative when rates are nearly half a point higher than they were several weeks ago.