Any time there's at least a moderate amount of movement in the overnight session, a consensus typically emerges as to the key driver of said movement.  This involves a majority of journalists and analysts simply regurgitating the opinions of the earliest coverage in many cases, or simply forcing a connection between the top news headlines and the market.  That all works out just fine when the early coverage nails it, but in cases like today, it leaves people like raising an eyebrow.

If we want to jump on the bandwagon, we could simply say that market optimism over the fast-tracking of Pfizer's covid vaccine in both the UK and US has traders favoring stocks and shunning bonds.  That would be quite miraculous considering the news in question was out yesterday yet no one in Asia or Europe thought to trade accordingly until just after the European PMI data was released this morning.  Gosh, that almost makes it seem like it might have been a market reaction to the PMI data?! 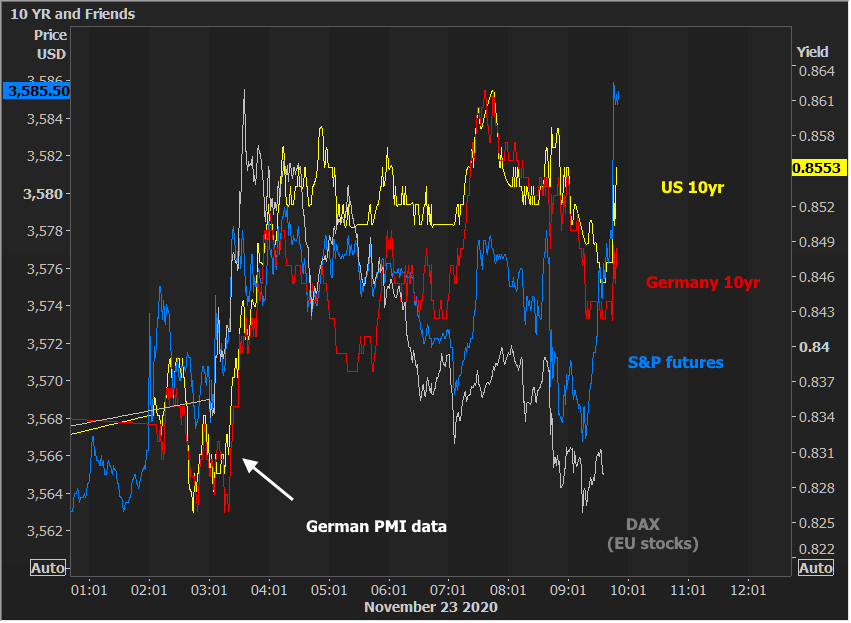 At the very least, we can conclude the overnight move was more complicated than "vaccine approval progress = risk-on."  This is 100% confirmed by the fact that EU stock indices are now back below their opening levels even as bond yields--both at home and abroad--remain slightly elevated.

Then there's the fact that all of the above is occurring in one small page of a much larger book.  In fact, we're left with a different takeaway each time we zoom out from these intraday movements.  Let's widen the view moderately to start.  Doing so suggests today's trading session still falls inside a "post-vaccine correction" that was kicked off by the "vaccine reaction" 2 Mondays ago (when Pfizer's 90%+ efficacy results were announced). 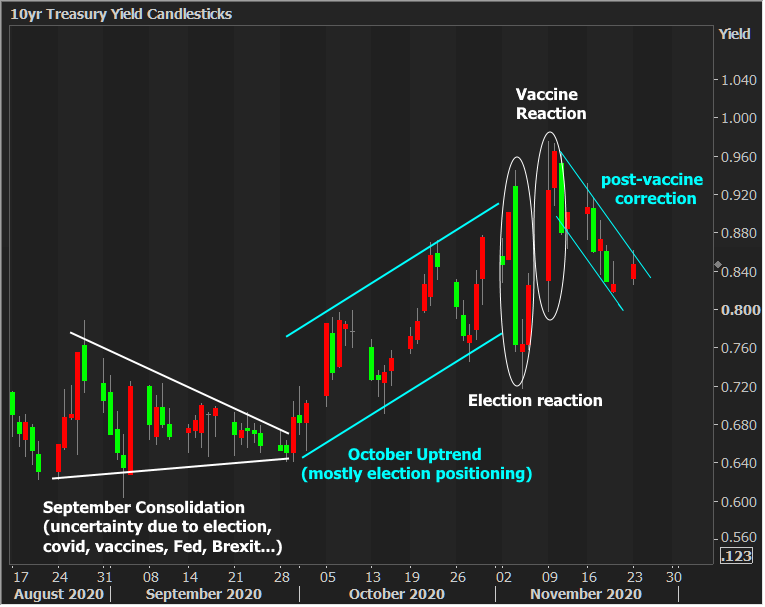 All of the trends highlighted above would seem fairly well-defined and well-justified, but zooming out to an even wider view suggests they're all taking place inside an even broader trend.  To use a highly technical classification system, we'll refer to this trend as "nope... things aren't great but life can definitely go on."  This is distinctly different than the "or maybe not" trend that preceded it, but basically just an extended version of the "ok, maybe life will go on" trend that followed the initial covid panic. 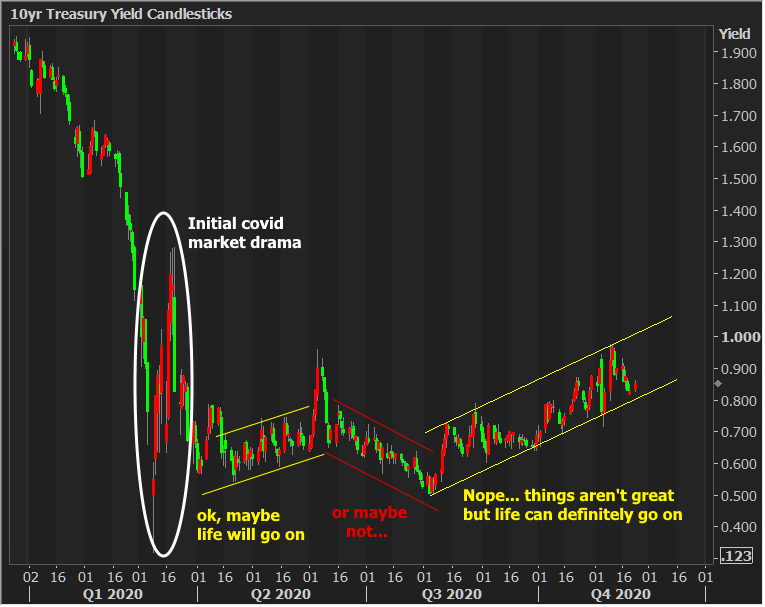 Given the current pace of covid case counts and increasing prevalence of lock-downs, the most recent trend would be hard-pressed to continue unabated into 2021, but if economic data holds up and case counts level-off, anything is possible.  In the short term, I would avoid reading too much into anything that happens on Thanksgiving week in the bond market (unless we get an obvious bombshell, in which case, rest assured we'll be talking all about it).

Data is fairly limited this week with no true "top tier" reports.  One might argue that the Fed Minutes release on Wednesday could be important, and while that is indeed the case, it's hard to trust a 2pm ET market reaction the day before Thanksgiving.  The only other major development of note will be the release of new conforming loan limits tomorrow.