Last week was unpleasant in the mortgage world, to say the least. Rates suffered a double whammy due to the surprise 50bp LLPA on refis and the trend breakout in the broader bond market. Ideally, lenders will have priced in the worst of the LLPA drama last week, but it's still a bit too soon to know how it's going to play out.  Don't be surprised to see a few lenders continuing to set rates out of sync with MBS movement for a few more days.

As far as broader bond market trends go, the pros and cons are more clearly defined and easier to see.  Last week was bad, but not terrible.  Some would argue that it was actually an ideal technical correction for stubbornly strong momentum seen during most of the past 2 months.

As of Friday, that momentum finally looked like it would try to reverse.  The fact that we're starting the current week in stronger territory adds to that case. 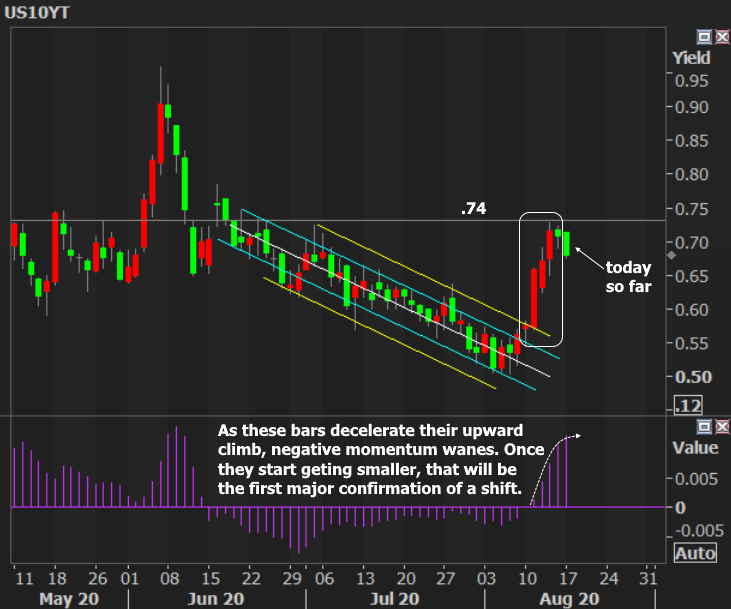 While this may be a simpler thing to observe and assess compared to the LLPA news, it's not necessarily more hopeful.  When it comes to lenders pulling back pricing across the board due to the surprise LLPA, at least we can hope--if not assume--that the worst of the defensiveness was seen last week.  When it comes to the broader bond market, however, it's not as safe to assume that rates will continue to drop this week just because we've seen preliminary evidence of support.

Don't get me wrong, we could easily see that support, and 0.74 may indeed prove to be a ceiling for the time being.  But it would be one of the best case scenario ceilings in a market where yields had very little trouble surging up to 0.96% just over two months ago.  The best argument against considering early June's precedent for rate ranges is simply that there was a lot more hope for a V-shaped economic recovery than there is now.

On the econ front, this week is limited to mostly housing-related data.  The only upper-tier non-housing data is Thursday's Philly Fed business survey.  Beyond econ data, stimulus negotiations, corporate bond issuance, and major covid-related headlines are all arguably much bigger threats.