I'm not an infectious disease specialist.  I haven't been staying up all night reading all available literature on coronavirus (CV).  But best I can tell, it's an awful lot like the flu.  Perhaps it's a bit more contagious or perhaps the symptoms are a bit more aggressive, but at the end of the day, we're dealing with an acute respiratory infection that runs a high risk of leading to pneumonia in the more vulnerable demographics (old people in close quarters).  The flu kills most of the people it kills the same way.

You don't hear about flu-related deaths because they're so very VERY common.  In fact, they're an accepted part of the annual flu surveillance.  Why aren't we more terrified about the flu?  Or rather, why is CV as terrifying as it is?  As far as the flu is concerned, there are several reasons we're not terrified about it.  The fact that it is a familiar friend with a fairly steady track record is a big help.  Perhaps even more important is the demographic reality mentioned above: 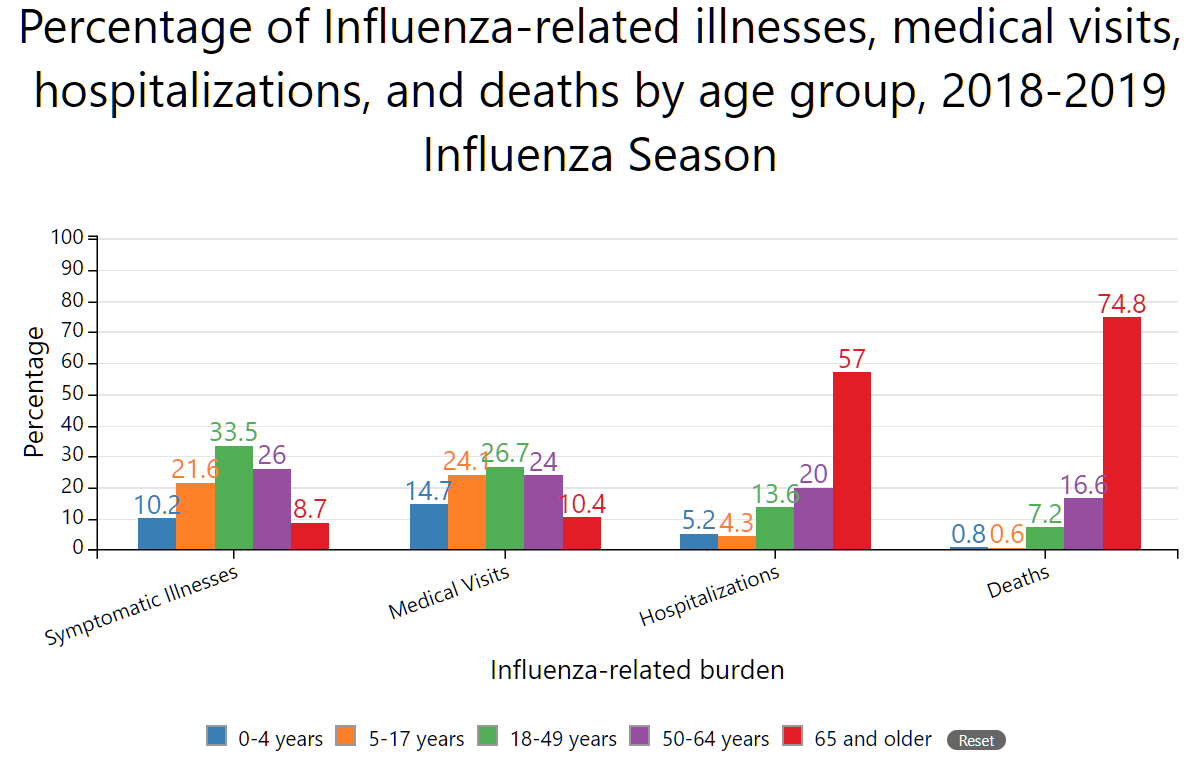 In other words, more than a third of all flu cases are in the 18-49yr old bracket, but they only account for 7.2% of deaths.  Contrast that with 65&over accounting for 8.7% of cases and 3 out of every 4 deaths.  Expand the demographic to those 50&over and the flu is almost exclusively a killer of older people.

I haven't seen a comparable statistic yet on CV, but when and if it becomes established and understood, I think it would go a long way toward easing the public's fears.  I think even if we could conclude that CV is similarly contagious and deadly versus the flu, we wouldn't be seeing nearly as much panic. UNTIL THEN, however, the uncertainty about the disease's killing potential is what's killing the global economy, and what's juicing US bond yields.

In much the same way that panic didn't really start to spread until more people began to die, the US financial market didn't really start to freak out until CV began to spread in the US.  And now that people are starting to die in the US (as far as I've heard, 2 people from the same nursing home in Washington, both in that vulnerable age group), the market panic ratcheted up again over the weekend. 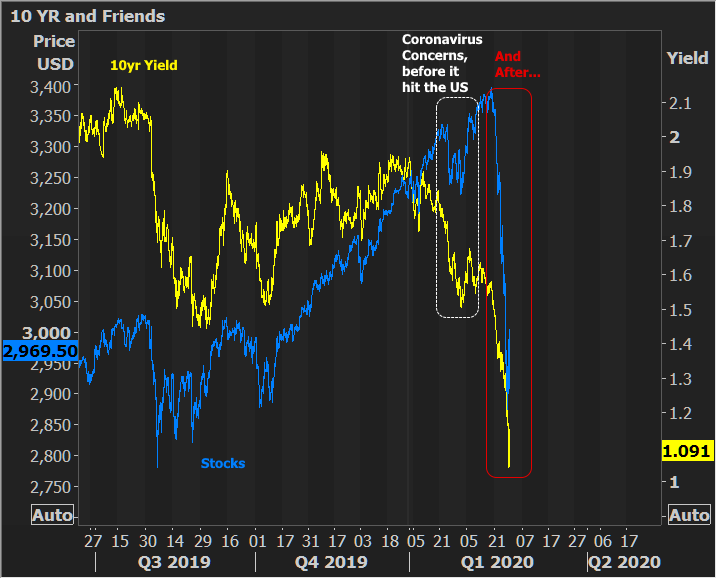 Before this, US Treasuries were already shrewdly accounting for the global economic impact of the case count in China.  That explains why yields did more to react in the white rectangle above.  That also meant Treasuries were positioned within 20-30 bps of all-time lows.  They've now easily covered that ground with the domestic wave of panic and are currently operating in uncharted waters to a much greater extent than they did during the 2016 breakout.  Incidentally, in terms of the size of move that's POSSIBLE, 2011/12 says there's still more room (not saying we'll get there... only that we have in the past). 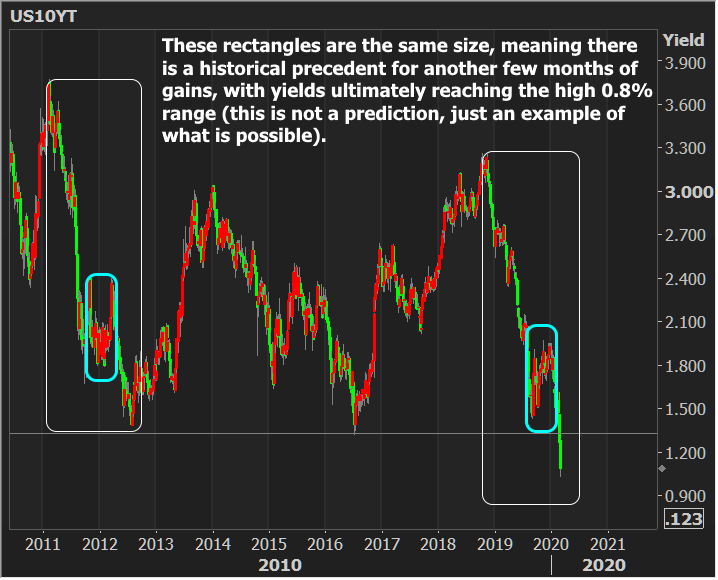 Should you fear a massive snap back toward higher rates?  Frankly, I've heard so many people say they're worried about this that I'd guess the average trader is not nearly as worried.  They like to trade against the herd mentality.  Remember, there is actual, lasting economic damage being done right now.  We're not dealing with the same sort of uncertainty or temporary move to the sidelines seen in 2016 or 2012.  The 2nd largest economy in the world has instantly experienced a significant, forced slowdown.  And due to all the fear of the unknown, many other countries are generating significantly less economic activity.  It's not the sort of thing that comes roaring back in a way that makes up for what was lost.

The big question is when we'll be done pricing-in what was lost.  Could be days, could be weeks or months.  When we're done, I think the nature of infectious diseases will prevent a big, immediate bounce.  And root causes aside, if you look closely at 2012 and 2016, there was never a vicious, corrective bounce just because the rally inspiration dried up.  It took 2013's taper tantrum and 2016's Trump election to set off the next big moves, and there was plenty of slow weakness on the approach to those breakouts.

I'm not telling you to be complacent about a rate bounce, but I am advising you not to assume low rates are gone forever at the first sign of a correction.  We could easily move back into the middle of last week's range and it wouldn't really mean anything.  Moreover, that 20-30bp increase in 10yr yields would almost certainly not result in remotely as much weakness in mortgage rates.

There's a smattering of what's typically the month's most important economic data this week.  I can't imagine markets are going to care much at all, unless it's significantly weaker than expected.  To be sure, strong data won't hurt us unless traders are simply looking for cover to hide-behind as they execute tactical trades they were planning on making anyway.