Slow Start, But This Week and Next Are Very Important

Bonds are contending with a modest amount of weakness overnight, but not enough to derail our conclusion that bonds have leveled off after an overdone selling spree 2 weeks ago.  The second part of that conclusion is that this week will offer the first of two important opportunities to see new momentum.  Specific timing is tricky with the Fed on Wednesday and the jobs report on Friday.  Near-term volatility potential peaks next week as CPI (consistently the most important economic report in 2022) is released on the Thursday before a 3-day weekend.

Bonds are simultaneously hopeful and anxious about ANY detectable shift in tone from the Fed.  Much has been made of the notion of a Fed "pivot," but that word implies a reversal from rising rates to falling rates.  As such, it's not 100% ideal because the only pivot we can really hope for is from "rising" to "rising slightly less aggressively."  Even then, the game plan is to keep rates at the ceiling (aka "terminal") level for as long as possible.

Long story short, the best case scenario would be to see the green line stop moving higher in the following chart.  Also note that the two big vertical spikes on 9/13 and 10/13 coincided with the release of CPI data.  That's why we're looking primarily to next week's CPI release for guidance. 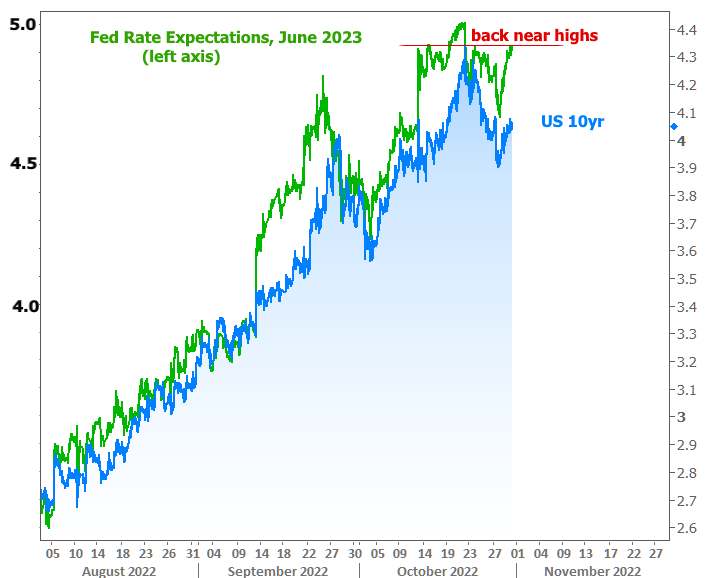