Everyone is tired of the persistent sell-off in the bond market, but weariness is no match for the negative momentum. We've long since run out of ways to make new observations about the same old phenomenon.  At times like this, we're resigned to waiting for salvation from data or, more miraculously, by some theoretical level at which traders feel it's time to "buy the dip" in bond prices.

There was a potential case to be made for dip-buying when 10yr yields first crested 4.0%.  Indeed, some anecdotal reports from the middle of last week suggested dip-buying was playing a part in mid-day recoveries.  The other factor in play was "short covering" which involves bond buying on the part of traders who'd previously bet on rates moving higher.  In those cases, bond purchases act to close the short trading position.  It can occur for profit-taking reasons or in order to defend against additional potential gains (something US traders were somewhat concerned about given the hefty mid-week rallies in EU bonds).

Ever since last Friday, however, it's become clear that dip buying and short covering were not nearly enough to turn the broader tide.  And even while 10yr yields over 4% may not make too much logical sense (if we think about the implications over 10 years of a 5% Fed Funds Rate by mid-2023), the path of least resistance for the bond market has been to price in things it isn't necessarily planning on seeing. 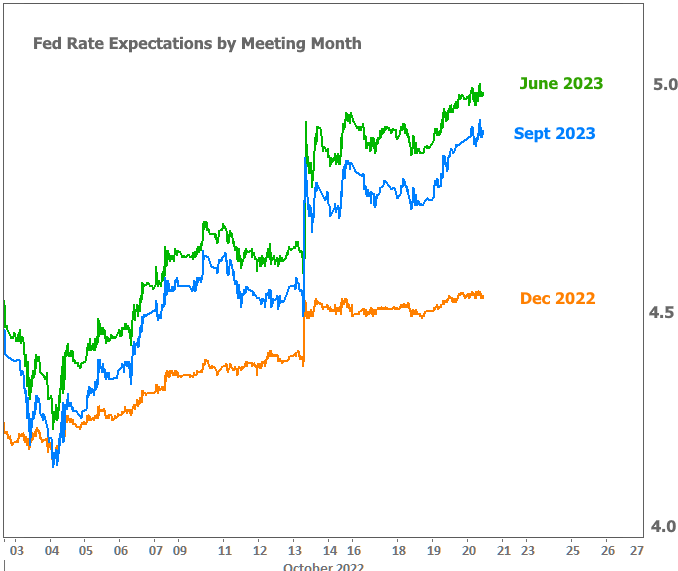 In other, more MBS-focused news, we've received a lot of questions about why we continue to focus on 5.0 coupons for intraday reprice risk purposes.  This is a fair question considering that 6.125% is the highest rate that can be slotted into a 5.0 UMBS coupon and no one is quoting 6.125% today.

But the current MBS landscape is not normal when it comes to "production" coupons (those that line up with rate sheets) being the most liquid coupons (those whose bid prices are least at risk of being far from where actual trades are occurring).  5.5 coupons are getting close in terms of liquidity, but we'd like to see another day or two of improvement (in liquidity, not necessarily price).

The following chart measures liquidity by comparing bid vs ask prices.  The lower the line is, the more liquid the coupon.  As you can see, 5.5s are close, but 5.0s are still noticeably better. 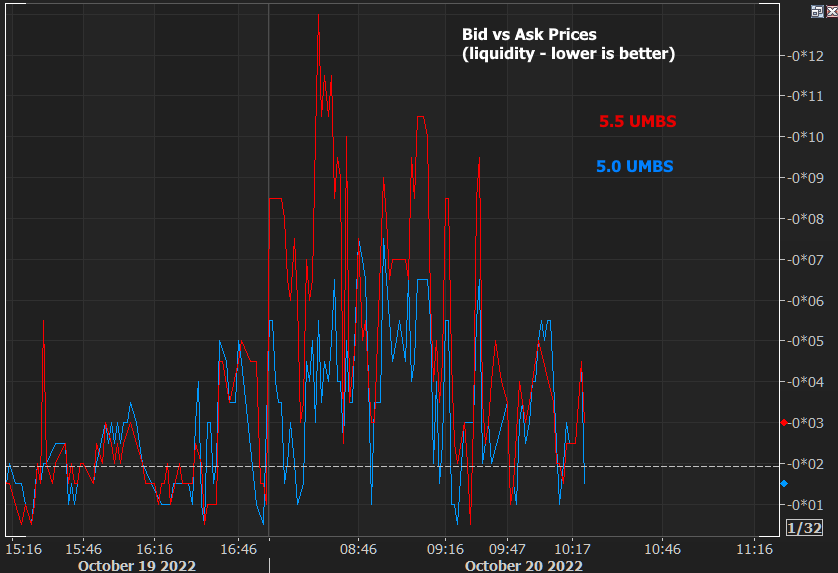