We knew CPI was the biggest potential market mover this week and it hasn't disappointed in that regard.  It has also provided bonus entertainment in the form of a paradoxical recovery after a sharp initial sell-off.

Truth be told, the initial sell-off was surprisingly tame given the 1.3 vs 1.1 CPI headline.  10yr yields didn't even make it up to last week's highs.  Far more surprising was the move back to stronger territory that happened shortly after 10am. 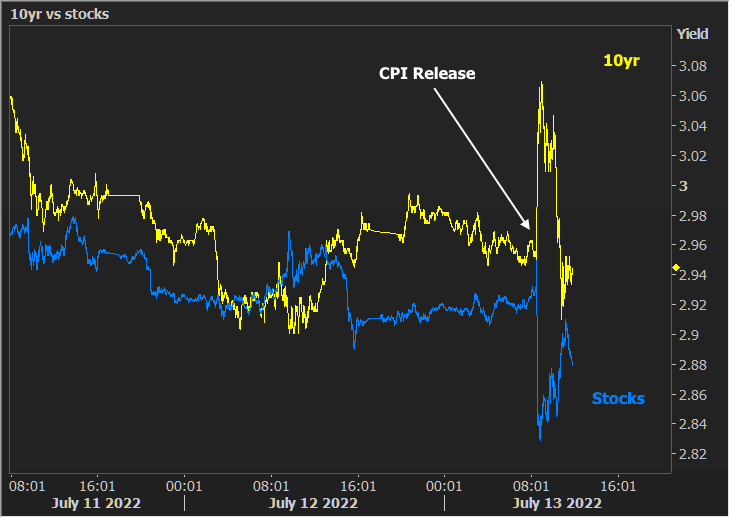 There are no obvious individual headlines to blame/credit for the swift recovery.  In other words, it's not as if some new news came out that rivaled CPI in importance or market focus.  Rather, it was more of a cascade of buying followed by a cascade of short-covering (also technically buying).  As for "why," that is a matter of speculation, but the word on the street is that traders are still thinking today's report represents peak inflation.  Don't ask me why they think that.  I don't know if they should or shouldn't (or even if they really are), but I've heard/seen it in more than a few places.

Today's report does little to change the already-priced-in 75bp rate hike seen from the Fed in 2 weeks, and it added roughly an additional quarter point of rate hikes to the end-of-year outlook.  After that, however, the outlook hasn't much changed.  Turn your attention to the green line in the chart below.  It represents the expected Fed Funds rate after the June 2023 Fed meeting.  Note that it was already lower than the December 2022 level (orange line) and that it dropped significantly faster during today's correction. 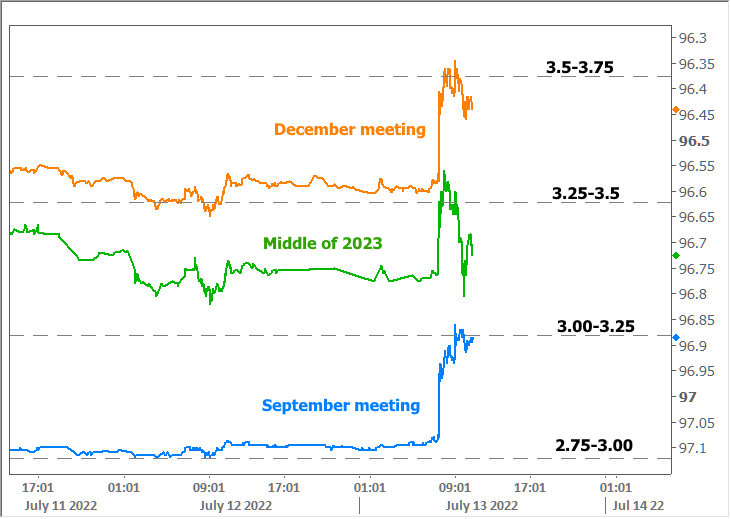 This is essentially the market's way of saying "yeah, we see that hotter inflation in today's numbers likely means another 25bps for the Fed, but we still think they'll be forced to cut rates in 2023."  As for WHY, that's as simple as the growing chorus calling for recession and the ongoing decline in commodities prices that theoretically results in lower inflation at some point.