We could certainly discuss the fact that bonds are improving so far today amid a strong curve flattening trade, but recent experience suggests we wait a bit before getting too invested in any particular recovery or any potentially supportive ceiling.

Instead, let's focus on what has been by far and away the most prevalent question we've received over the past week.  Actually, it's not one specific question as much as it has been variations on a theme.  Specifically, lots of people want to know why we're only showing 30yr UMBS coupons up to 4.5 and why we're not showing 5.0+.  Other forms of the question ask when it will be time to switch our focus from 4.0 coupons to 4.5s.

The savviest among you already understand that a 4.5 UMBS coupon is like a bucket that can only hold loans with note rates between 4.75 and 5.625%.  That seems like an ideal range for current rate sheets, so why aren't 4.5s the dominant coupon?

Rest assured, if bonds were to hold ground at current levels for a few more weeks, 4.5s would make more sense, but also consider that 4.0 coupons can hold rates up to 5.125%--a level that exists on every rate sheet.  4.0s are also SIGNIFICANTLY more liquid (more buyers and sellers willing to transact at any given price at any given time of day).  The difference between 4.0 and 4.5 coupons is immense in terms of liquidity.  Between 4.5 and 5.0 coupons, it's staggering.  And from 5.0 to 5.5 coupons, well... don't bother.  5.5s might as well be a random line drawn in pre-school art class.

Volume?  Don't get me started...  As of yesterday, 2.5 coupons still had more volume than 4.0 coupons!  And 4.0 coupons had more than 4 times as much volume as EVERY higher coupon put together for next month's settlement.  Once we move out to July settlement dates, that volume tally evens out a bit, but we can assume that's almost exclusively due to 4.5 coupons being the next logical step for current rate sheets (4.0s will still set the tone for reprice risk for now).

How about some charts to bring this notion of "liquidity" home?  Here's how 4.0 coupons look in terms of bid price, ask price, and the spread between the two (lower = more liquid = more deserving of your attention). 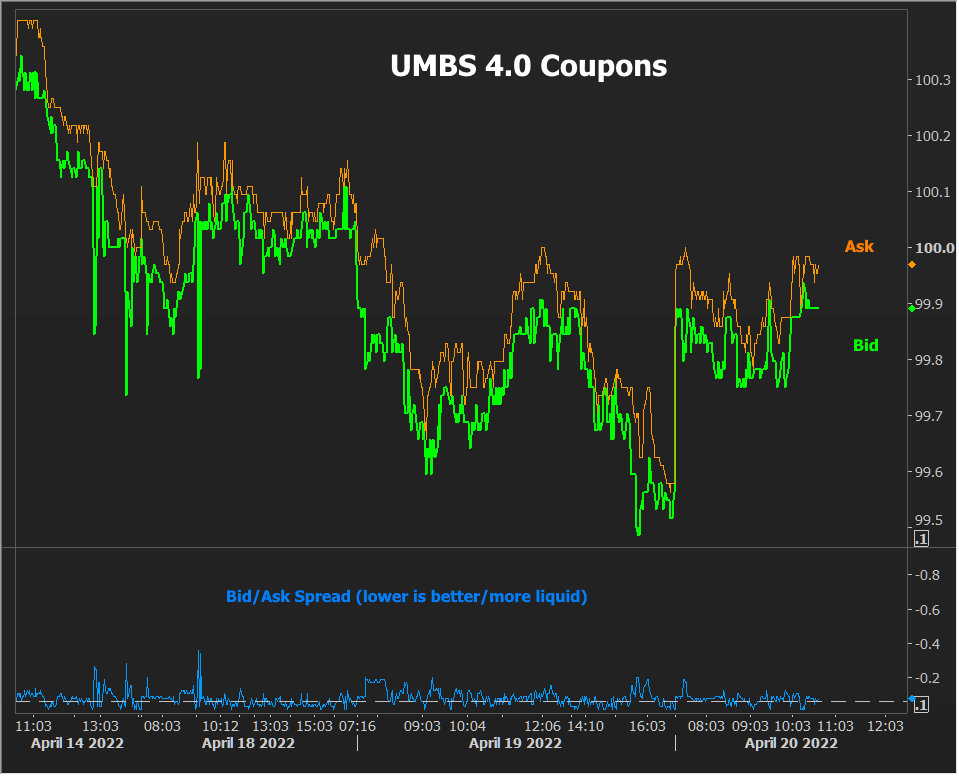 The white dotted line at the bottom is one I keep on my own refinitiv dashboard as a reference for MBS coupons being relatively liquid.  Here's how the same chart looks for 5.0 coupons: 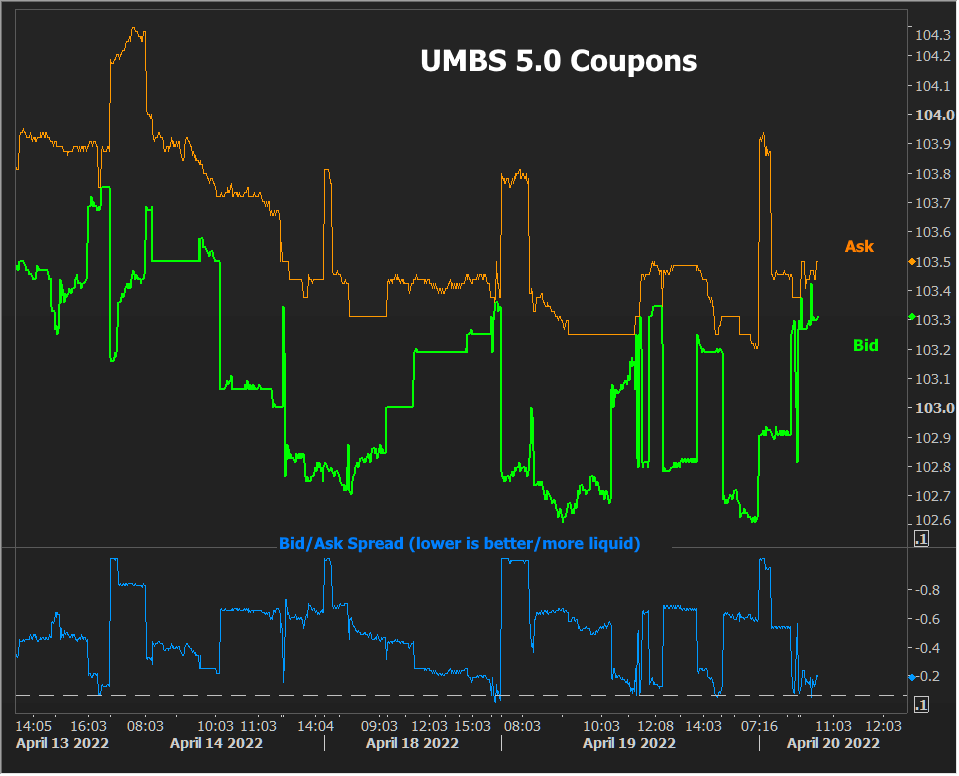 If the chart above doesn't make a huge light bulb appear over your head, something is wrong (or I'm simply not explaining things clearly... perhaps both?).  Just in case I've lost you, let's reiterate:

My last attempt to bring this all home for today is a chart that compares the bid vs ask spread of various coupons.  If this doesn't make things clear, I'm not sure what would: 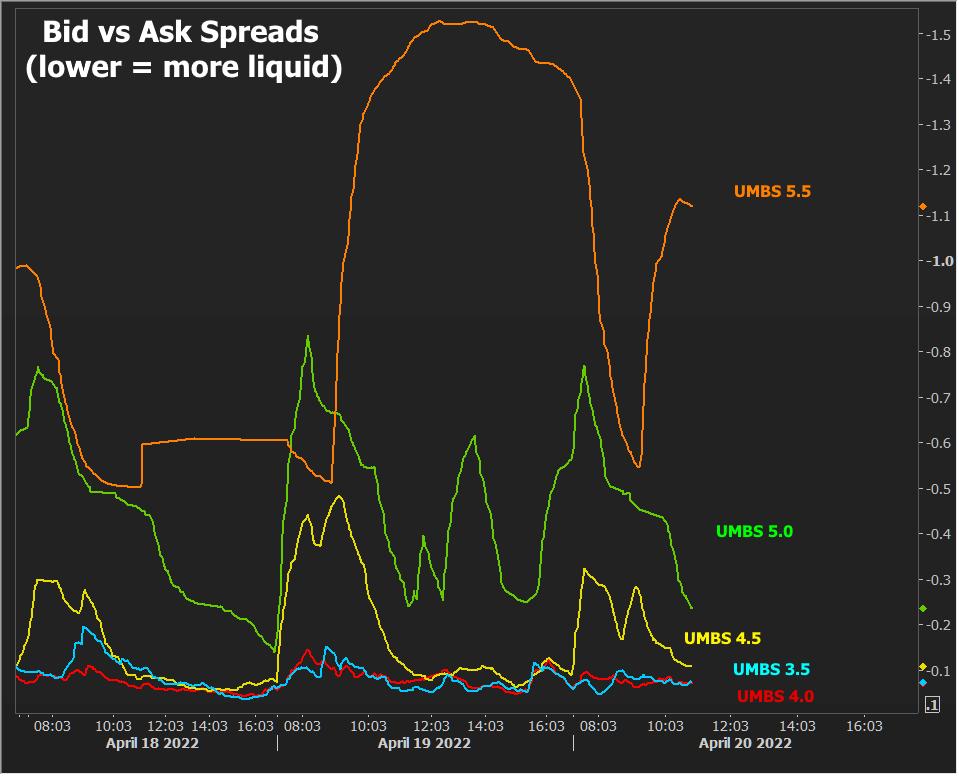 Will this change?  Yes, of course it will change eventually.  After all, if rates are 5.5% in a month, the 4.0 coupon is no longer relevant.  Still, the market needs time to sow the seeds of liquidity in the MBS market.  Until that happens, it makes ZERO sense to focus on illiquid coupons.  In fact, you could end up getting very bad guidance from price movement in those coupons.  After all, if sellers and buyers are that far apart, you only really know a range of prices.  Moreover, because prices are displayed as bid-only, you don't even know what that range is unless I tell you.

Rest assured, once that yellow line looks more like the teal/red lines, it will make more sense to pay attention to 4.5s.  Until then, you can ASK to see 5.0 or 5.5 coupons, but my response will likely be a simple link back to this commentary.