The bond market is looking past Ukraine and economic data this morning to focus on the European Central Bank (ECB) announcement.  The reaction in EU bond markets has been decidedly weak with German 10yr Bunds up 8bps on the day and more than 13bps trough to peak.  While that may make the 3bps of opening weakness in Treasuries seem like the lesser of two evils, US bonds are nonetheless at their worst levels in nearly 2 weeks.

This morning's chart is both interesting and informative, but it requires a bit of explanation.  We normally let these charts scale the y-axis so the charted lines automatically occupy the same amount of vertical space (visually).  That can be misleading when comparing things like US and EU 10yr yields if one happens to be moving quite a bit more than the other.  This is exactly the case so far this week as EU yields have risen the better part of 40bps while US yields are up only 30bps.  Lastly, stocks are also re-scaled a bit (arbitrarily) to show the risk-on/risk-off correlation with bonds over the past 2 days and the divergence this morning as bonds choose to follow EU bonds to higher yields. 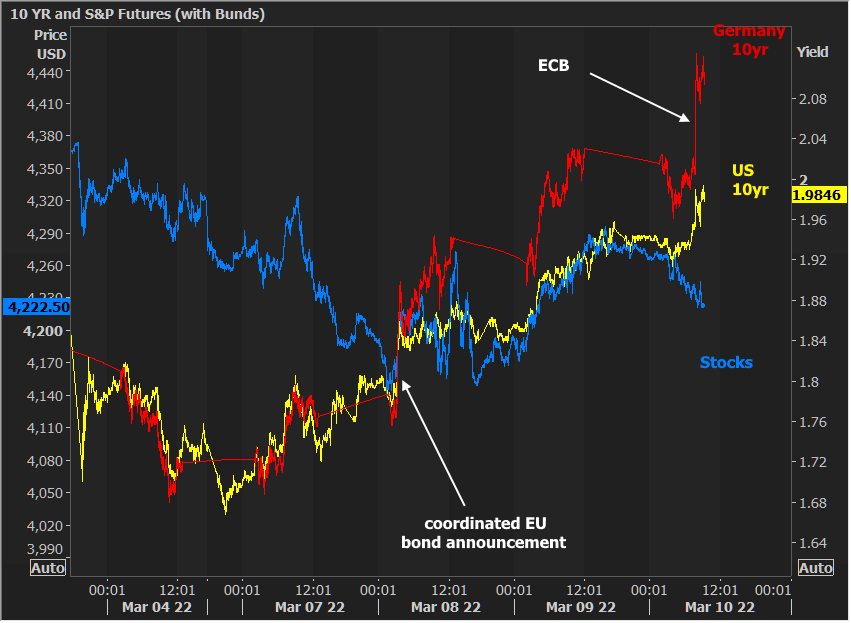 As the annotations suggest, and as we pointed out at the time, the tone really shifted on Tuesday as markets managed a "risk-on" bounce and the EU announced a large coordinated bond offering (rare).  Since then, EU yields have been more volatile and have sold off faster than US yields.  This morning's ECB announcement was just another reason to do more of the same.

This morning's CPI data was fairly uneventful with all components falling in line with expectations.  Markets traded it briefly (US yields fell for a moment) before EU weakness was back in control.  The afternoon's 30yr bond auction reaction may be worth tuning in for--not so much for the first few minutes as for the entire hour.  The goal would be to see if bonds have any sense of relief after working through the entirety of this week's issuance burden.  If relief comes before then, it would go a long way toward establishing a sense of support after 3 brisk days of selling pressure.