As we look back on the past few trading days (and reconcile them with up-to-the-minute action) it increasingly looks like stocks and bonds priced in a flight to safety heading into the weekend and are now in the process of unwinding those trades.  This isn't a conclusive or perfect explanation given that stocks are still quite a bit lower than they were in the first half of last week.  Bonds are possibly taking some extra damage from concessionary trading ahead of today's Treasury auction.  Additionally, corporate debt issuance is adding to the selling pressure.

On top of the broader bond market weakness, the mortgage market continues to underperform rather significantly.  It's one thing to say these things with words, but another to see how they play out on a chart.  The following charts have 3 components.  The top section compares 30yr fixed rates to 10yr yields.  The Y-axis in the top section is the overall CHANGE in rates from the 2018 peak (thus allowing for a fair comparison between the two while still being able to see the correlation and divergences). The lower section of each chart is the spread between MBS yields and a 5/10yr Treasury blended yield (a better benchmark for MBS than 10yr yields). 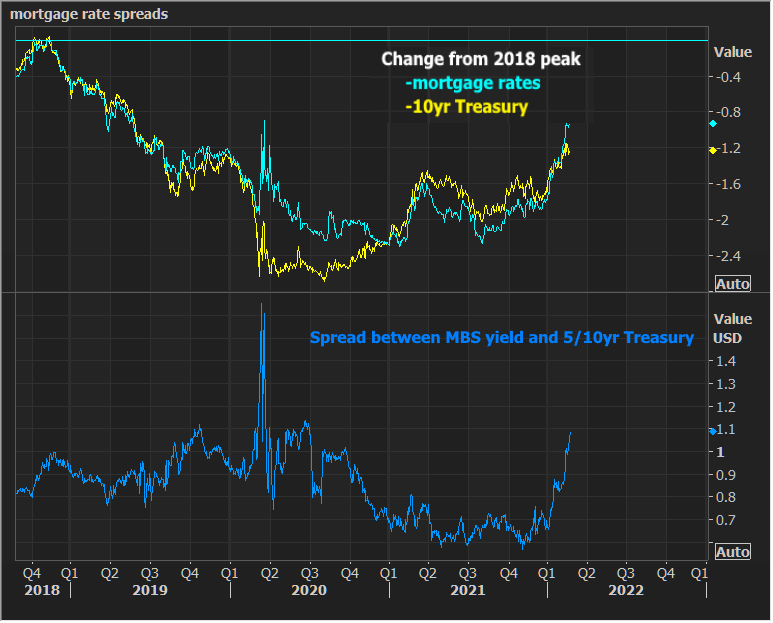 The chart above looks pretty dire in and of itself, with MBS doing as bad as it's done against Treasuries for years (not including the brief craziness in March 2020).  But if we look back a bit farther, MBS have been historically strong vs Treasuries since 2015 at least.  Moreover, the range has been generally flat.  Everything's relative... 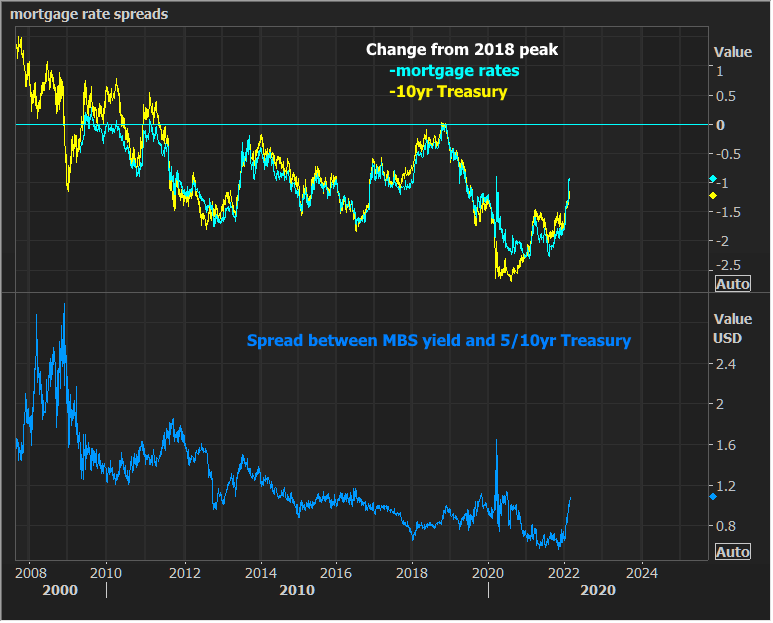 The bigger concern is where spreads may be going and how much the Fed may care.  In 2012, they cared enough to roll out QE3 (MBS-only QE), but the current Fed seems to be much cooler on the idea of being a big sponsor in the mortgage market.  It remains to be seen whether there's a level of turmoil that would cause them to warm back up.  One thing's for sure: with the most recent home price data closer to 20% year-over-year appreciation than 10%, we're a long way from finding out.