Any conversation about momentum, victory, or defeat in the bond market must be prefaced with the acknowledgment that we're dealing with what would historically be a very narrow range that's very close to record lows.  In other words, there's no drama here in the bigger picture.  Nonetheless, it's always good to be vigilant about threats to our nice little low rate utopia.

The ridiculous volatility seen in March was the first major threat to the new low rate regime, but I hesitate to even count it.  March was all about a unique breakdown in liquidity, fueled by broad-based market panic surrounding an unprecedented input (covid/quarantines).

It wasn't until June that we saw the next threat.  At the time, markets were willing to entertain an earlier-than-expected V-shaped economic recovery with a week of surprisingly stellar economic data fueling the fire.  Things settled down quickly the following week and rates began to grind relentlessly lower.  They ultimately hit their effective all-time lows (March 9th was technically lower, but only for a few hours on the most volatile day of the most volatile week in decades) in early August and speculation mounted for a technical correction.

The correction happened 2 weeks ago.  It was quick and obvious.  It surrounded a Treasury auction cycle and it hid behind several vaccine-related headlines.  By Friday of that week, we began to entertain a technical ceiling at .73% and by last week, that ceiling was confirmed as yields plodded lower in linear fashion.   But now, just as the 2-month downtrend in yields faced a technical breakout on August 11th, last week's downtrend is experiencing its own breakout today. 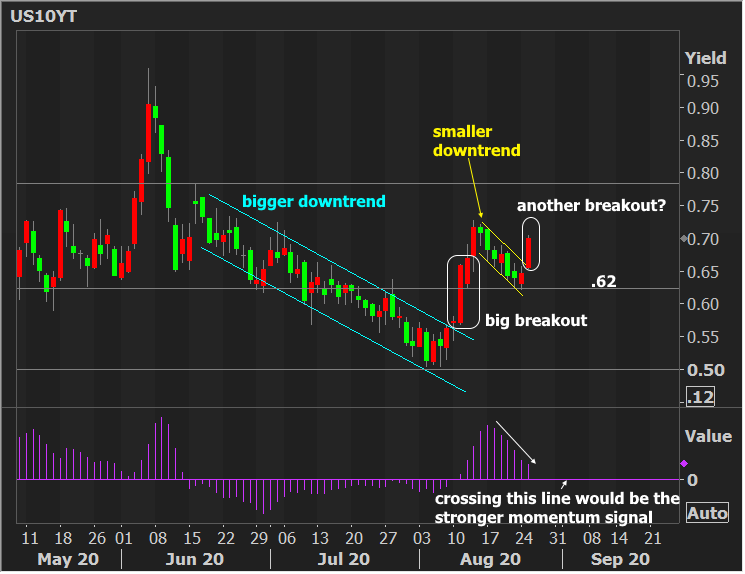