MBS Live Day Ahead: Economic Data Ramps Up Ahead of Week's Early Close

After a very slow start on Monday, yesterday's month-end trading session proved to be more consequential for Treasuries with yields ultimately rising enough to make it back to the doorstep of the uptrend they'd broken out of only 2 days prior.  A picture is worth more than a sentence in that regard. 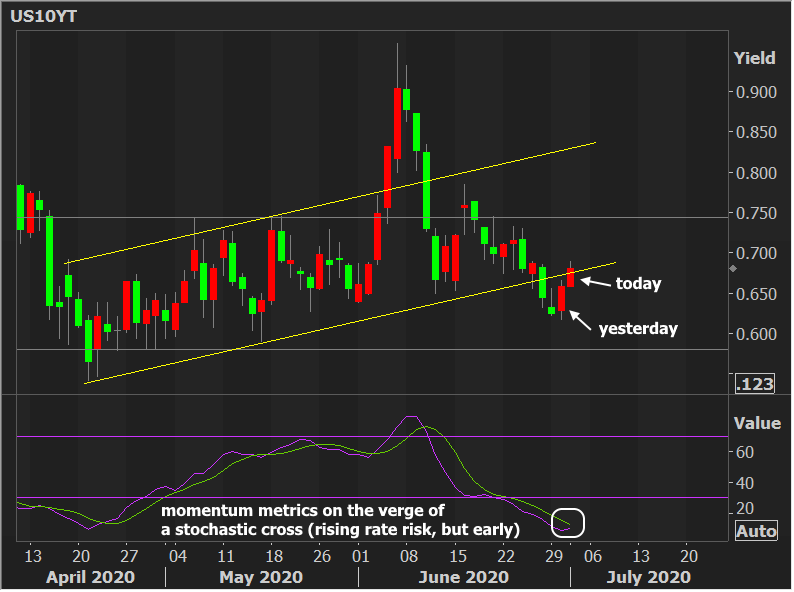 So is the new rally now over, and are we doomed to watch rates move steadily higher?  Wouldn't you like to know!  Wouldn't everyone like to know, in fact, because knowing the answers to such questions would mean knowing how the coronavirus situation would play out in the near future.  That's been the key market mover on any given day, with very few exceptions.

When exceptions have been made, they were for things like Fed policy and big ticket economic data.  The ADP employment report is occasionally treated like big ticket data due to its implications for the nonfarm payrolls component of the big jobs report from the US government.  That was the report that kicked off the alarming spike in bond yields in early June.  But with today's report released as I write, it doesn't look like we'll be seeing  repeat performance (despite the positive implications for the economy).  Perhaps the market will be more willing to react to tomorrow's jobs report (coming out a day early due to 4th of July creating an observed market holiday on the 3rd).  Or perhaps we'l see more willingness to react to ISM manufacturing at 10am.

Odds are, though, that last month's data was staggeringly different than expectations, and it came at a time where markets weren't yet confronting concerns about a 2nd wave of covid-19 cases in several states.  We could also be seeing some strategic trades being made as part of "new month" strategies.  This could bring some volatility to bonds regardless of today's technical and fundamental data.

Lastly, there's MBS.  At the risk of jinxing it, they're starting the day out just barely positive even as Treasuries are moderately weaker.  Yesterday was a similar story.  If Treasuries can avoid weakening too much, there's a chance the mortgage market won't even notice.