This week's supply of economic data is rapidly dwindling and we've yet to see a bond market reaction worth writing home about.  This morning's crop provided the most recent example.  If the market's recent willingness to look past short-term inflation spikes is any indication, Friday may not be much different.  That only increases the focus on next week's bigger-ticket data (specifically nonfarm payrolls on Friday).

It's important to keep the context in mind though.  We've moved on from the big-picture questions from the spring.  At that time, rates were leveling off after adjusting abruptly higher on a combination of Treasury issuance and eventual Fed tapering.  The early summer months brought an opportunity for the Fed to clarify its stance in light of improving economic data.  In other words, the stronger data (especially the "transitory" inflation spikes) didn't immediately derail the Fed's bond buying campaign, nor did it spook bond traders.

The result was a friendly breakout of the springtime bond market consolidation as seen in the chart below.  From there, we've moved on to the next consolidation pattern.  It's much smaller, but the same underlying mentality is in play.  We're waiting on some combination of data and Fed-speak to let us know if yields would be justified in correcting even lower, or if they need to retreat back up into the previous range.  The upcoming jobs report seems like the best candidate to inform that decision, and it seems like no coincidence that it will occur right as the current consolidation runs out of room. 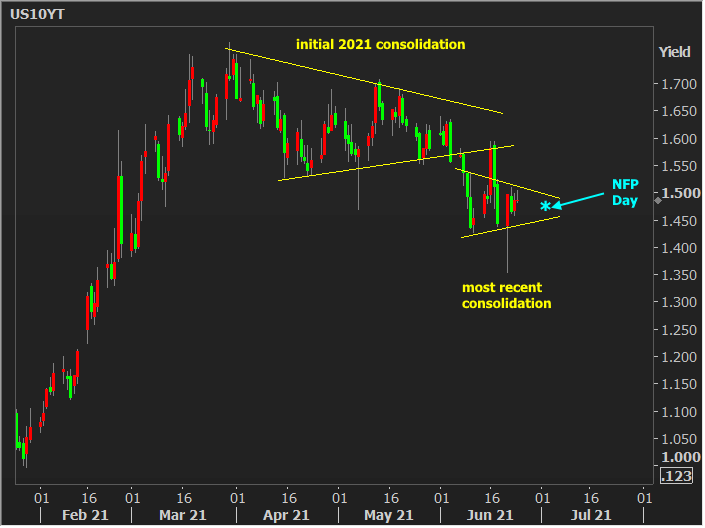 That's not to say a breakout couldn't happen sooner.  Granted, 7yr auctions haven't had much of an impact on the last 2 cycles, but before that, they produced some of the biggest days of volatility (more than enough to challenge one of the trendlines in the chart above).  That's not something we should plan on, but still something that should be acknowledged as possible.