MBS Live Day Ahead: Another Week, Another Chance, But No Guarantees

Point being: sell-offs have historically begun to collapse under their own weight when they last this long--even if that "collapsing" only amounts to a temporary reprieve. While that doesn't guarantee we'll end this week at lower yields than last week, the odds continue to improve.  All that having been said, none of the above should affect the lock/float stance.  We're staying defensive until the market confirms a shift.

So what would "confirmation of a shift" look like?  Much like a syndrome vs a disease, such a shift would be defined by a certain group of symptoms as opposed to the presence of one dead giveaway.  These symptoms should ideally include consecutive days with yields moving lower--preferably breaking a few of the key pivot points that were broken on the way up (1.68 and 1.62 are the clearest contenders).  With yields starting out over 1.68% this week, an inability to move below that floor would send a very bearish message indeed--one that would leave us to wonder how soon we might see a test of late 2019's highs at 1.95%.  And if that seems like a long way away, just remember how far away 1.75% seemed less than a month ago. 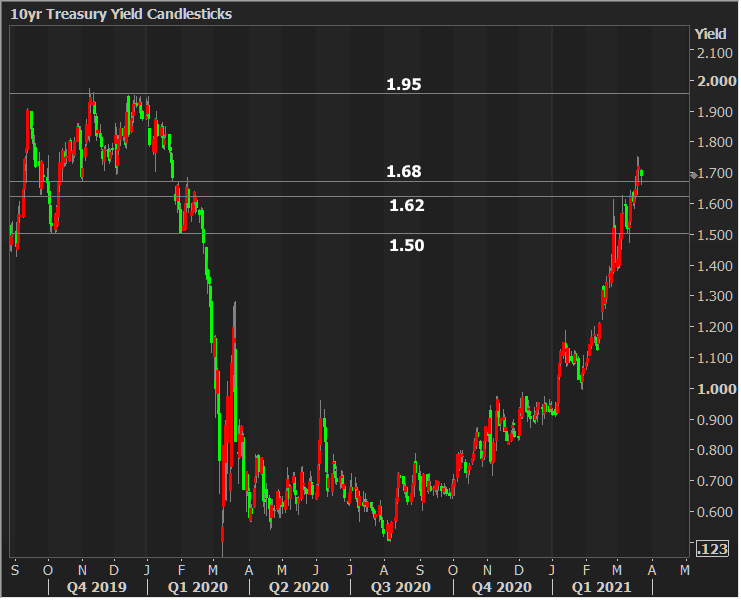 There are several economic reports this week that would traditionally fall in the "market mover" category, but there's no reason to suspect markets are ready to move for econ data just yet (especially in light of the absence of a reaction to last week's big miss in Retail Sales.  In terms of scheduled events, we'd give preference to the Treasury auction  cycle as another opportunity for market participants to "vote" on the new yield range.  Ultimately, if we make it through this week without any major correction, we might be ready to put on our "falling knife catching" gloves based on the hope for an April tradeflow reversal (based in part on the end of Japan's fiscal year, which has been a near-constant source of selling pressure in March).