There were modest pullbacks in both the seasonally adjusted annual numbers of permits and housing starts in June. But it was only because of strong gains in the multifamily sector that construction figures, provided by the U.S. Census Bureau and Department of Housing and Urban Development, stayed even close to on track.

Permits for residential construction ticked down 0.6 percent from their May level to an annual rate of 1.685 million units as permits for single-family houses fell 8.0 percent to 967,000 units. Multi-family permits grew by 13.1 percent. On a year-over-year basis, total permits were up 1.4 percent while those for single-family residences were down 11.4 percent. Multifamily construction authorizations jumped 27.8 percent on an annual basis.

Analysts polled by Econoday were expecting a steeper reduction. The consensus estimate was an annual rate of 1.666 million permits.

Housing starts fell by 2.0 percent on a seasonally adjusted annual basis and the 1,559 million rate was down 6.3 percent compared to June 2021. Single-family starts decreased 8.1 percent and 15.7 percent from the two earlier periods to 982,000 units. Multifamily starts rose 15.0 percent from May and were 16.4 percent higher than a year earlier.

Robert Dietz, chief economist for the National Association of Home Builders (NAHB) said it was the first time since June 2020 that both single-family permits and starts numbered fewer than 1 million units.

Starts were slightly lower than anticipated. The Econoday analysts’ consensus was 1.588 million units.

Housing starts are still surpassing the year-to-date numbers in 2021. The 839,800-unit total is up 5.9 percent from the same period in 2021. Single family starts are 0.2 percent higher and those in multifamily buildings are up 19.7 percent.

There has been a striking increase in the number of starts in two to four family buildings thus far this year. The total is small, 8,800 units, but this is up 30 percent year-over-year. According to this chart from Bill McBride at CalculatedRisk, it is the highest rate of such starts since the mid-1980s. 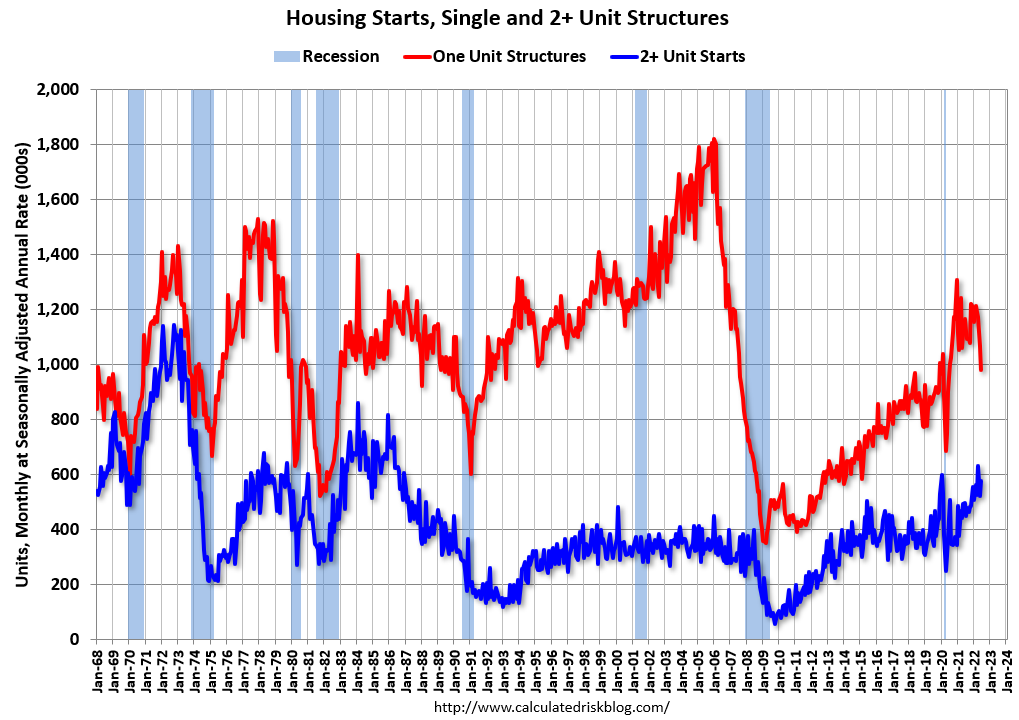 Houses have been completed at a slightly lower pace during the first six months of 2022 than over the same period in 2021. Completions are down 0.6 percent, although the number of single-family houses brought online rose 3.7 percent. Multifamily units are down 12.7 percent and there has been a 55.9 percent increase in the number of two-to-four-family housing units completed year-to-date.

Dietz said the number of single-family homes permitted but not started has likely peaked after rising over previous quarters due to supply-chain issues. The 147,000 single-family homes authorized but not started “marks a year-over-year decline, the first such decline in a year. Additional declines for this count are expected ahead as permit growth weakens and backlog is reduced.”