The housing market has been keeping its head down, keeping calm, and carrying on in the face of the biggest rate spike since the 1980s.  The ability to ignore higher interest rates is nothing new for home sales.  In fact, sometimes we see almost no reaction in sales numbers when rates rise.

The following chart shows several of the biggest rate spikes of the past decade (and yes, they do look small in comparison to 2022).  While there is perhaps some small impact on new home sales, it's minimal at best.  Perhaps home price stability had something to do with that, or perhaps those rate spikes weren't big enough to have a major impact in their respective home price environments.  Perhaps sales were simply still experiencing a rebound effect from the housing crisis. 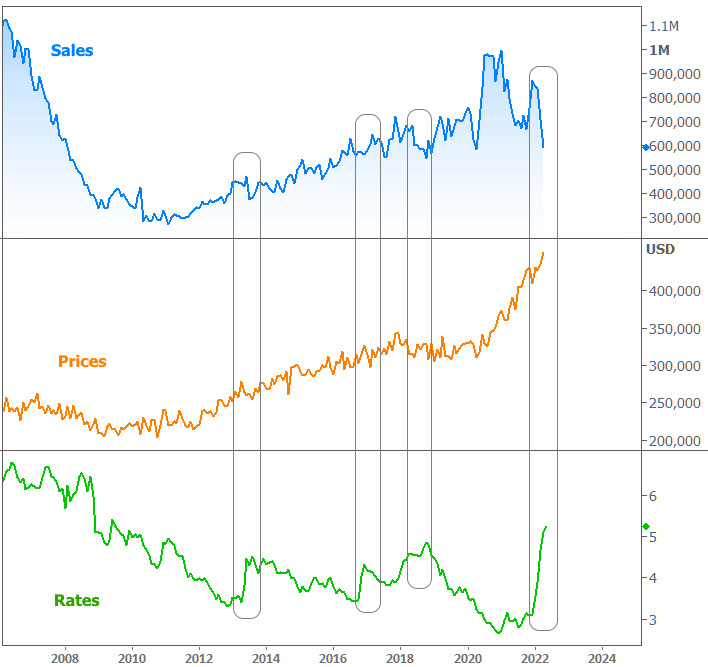 Whatever it was that accounts for the resilience in the past, it's clear that something new is happening right now.  Moreover, it is happening QUICKLY.  Just last month, New Home Sales were still at 763k, a level not seen between the housing crisis and the pandemic.  Now in today's new numbers from the Census Bureau, New Home Sales have plummeted to the lows seen only a few times in the 3 years leading up to the pandemic.

Let's not overcomplicate this: whether we're talking about new or existing homes, prices have surged at the fastest pace on record. 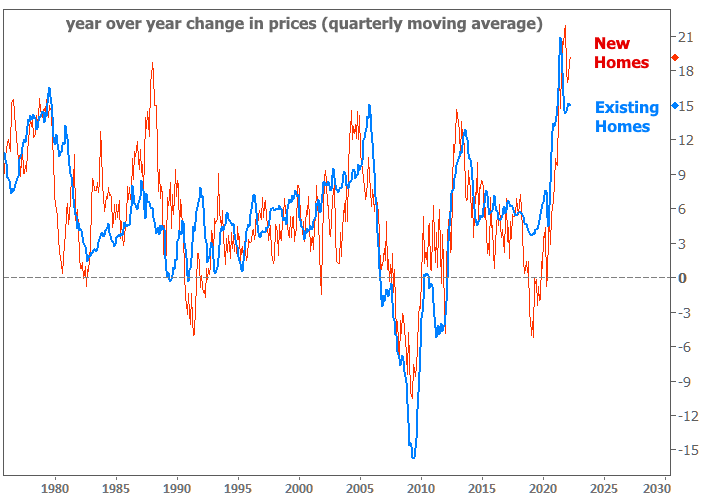 This has occurred in spite of wages growing at nowhere near the same pace. 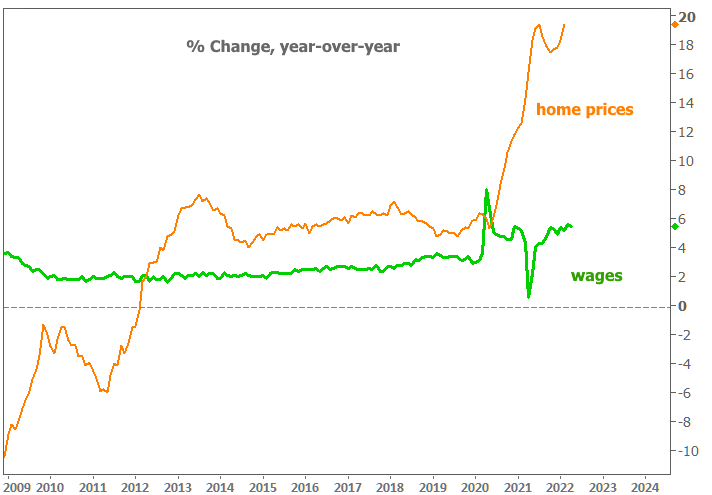 But has it also occurred in spite of rising rates?  That's a much better question.  To some extent, the supply/demand environment in housing has given home prices some immunity from higher costs (whether those costs are from higher prices or higher rates).  To what is probably a larger extent, we simply haven't seen enough time pass for the effects of higher costs to take a toll on demand.  After all, rates didn't really begin to spike until a majority of the recent home price gains were in place. 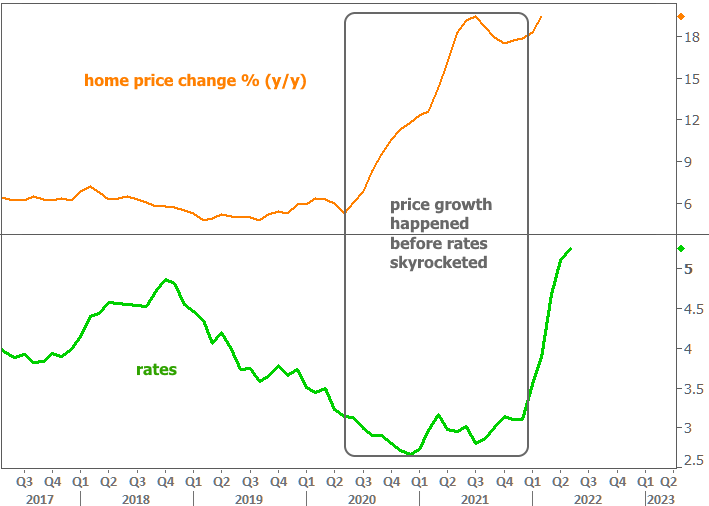 We've never seen of this magnitude in rates that BEGINS AFTER prices have already risen more than 30% over 2 years.  The juxtaposition of those two facts goes a long way in helping us reconcile the drop-off in New Home Sales.  Some might say inventory issues account for even more of the drop, but that argument holds more water when examining the existing homes market.  New Home inventory, on the other hand, looks quite different.  After April's sales slump, inventory levels are the highest in years. 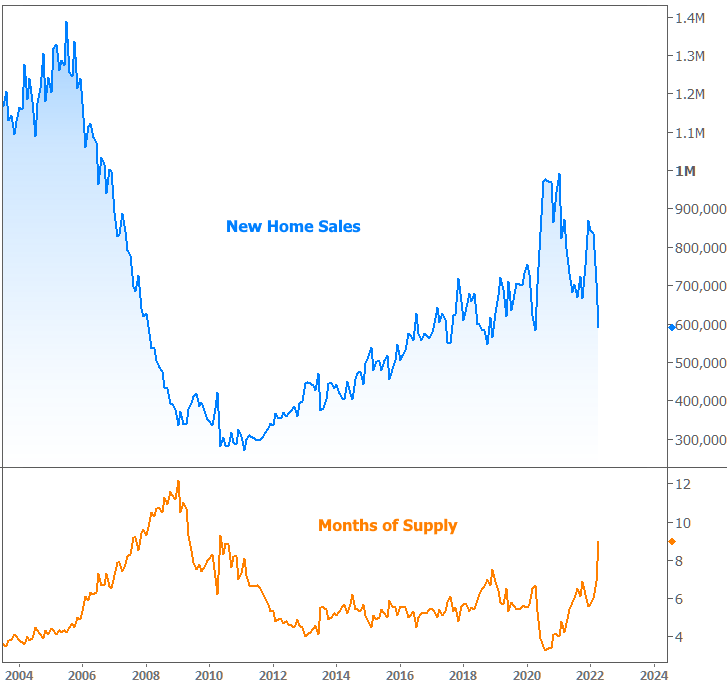 So inventory is no longer a problem for home sales?  Eh... not so fast.  There's a big difference between New and Existing homes. New Homes did all the heavy lifting on the inventory front after the onset of the pandemic.  Existing Homes continued to languish (and the most recent uptick is merely seasonal, for what it's worth). 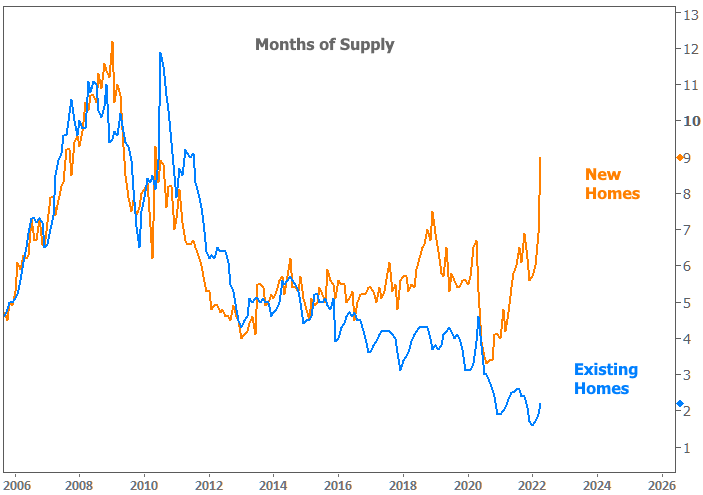 There are a few reasons for this.  Price is one of them. 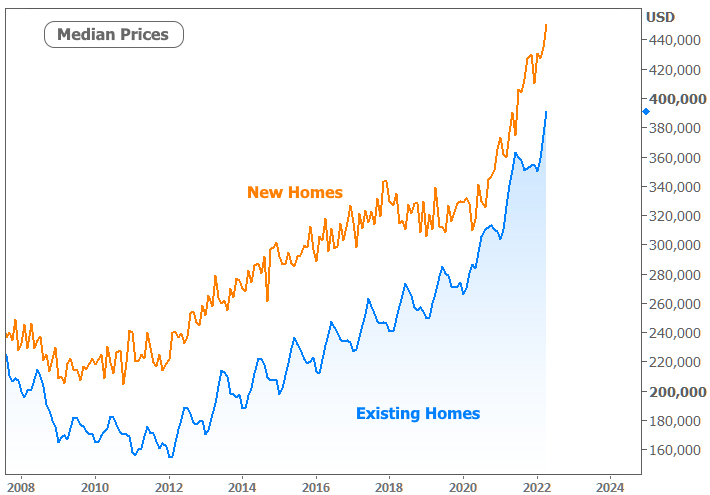 The other is the sheer scope of the Existing Homes market relative to New Homes.  And herein lies the biggest counterpoint to all of the above.  In terms of sales and inventory in the housing market, it would be an understatement to say Existing Homes do the heavy lifting. 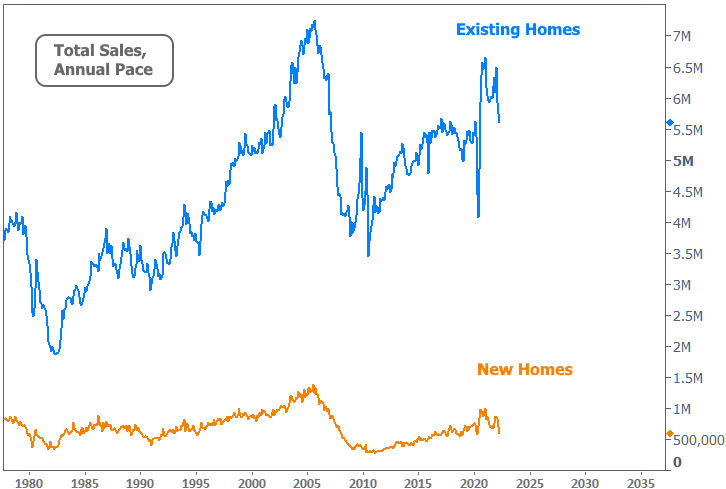 All that to say the housing market hasn't exactly turned on a dime to the extent suggested by today's New Home Sales data.  Yes, sales are declining, but that's a logical consequence of the affordability issues created by an unprecedented simultaneous surge in prices and rates.  Housing overheated.  Cooling is welcome.  Examining and quantifying that cooling will be more interesting and more meaningful in the coming months as the home price data increasingly catches up with supply/demand/affordability inputs.