Only 19% of Consumers Think It's a Good Time to Buy

Consumers opinion about the wisdom of buying a home went underwater in April 2021 and continues to sink. Fannie May says the question about whether it is a good or bad time to buy on its April 2022 National Housing Survey elicited positive responses from only 19 percent of respondents while 76 percent said it was not. This resulted in a net positive score of -57 percent, down 8 points from March and 56 percent year-over-year.

The question is one of six from the survey used by Fannie May to construct its Home Purchase Sentiment Index (HPSI). Net positive responses to all declined in April, bringing that measure to 68.5, its lowest level since May 2020, This is down 4.7 point from March. In April 2021, the index read 79.0 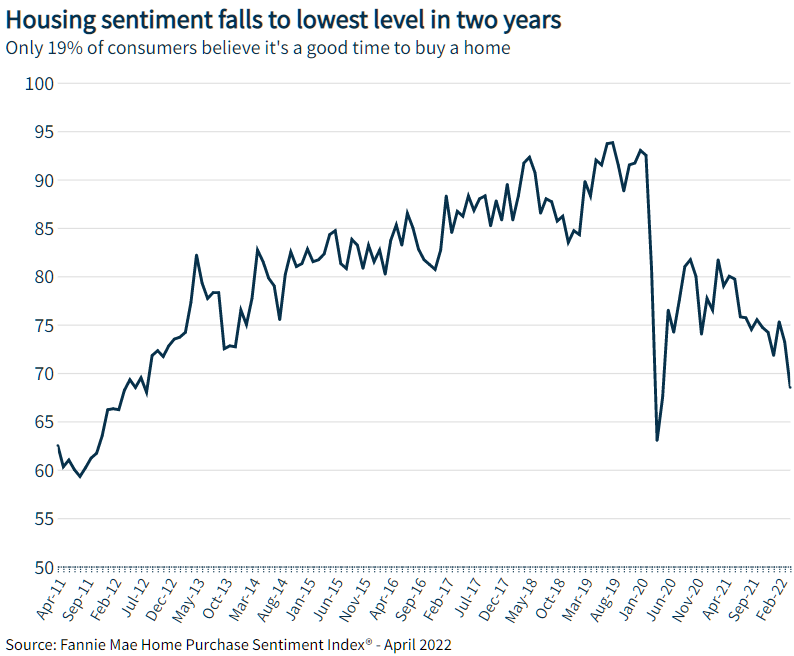 Asked the corresponding question about whether it is a good time to sell a home, 72 percent said yes, down 2 points from the prior month. The net positive of 51 percent was up 10 points year-over-year.

Seventy-three percent of respondents expect continued increases in mortgage interest rates, while only 5 percent said they would decline and 18 percent think they will remain the same. The net of those expecting lower rates was down 3 points for the month to -68 percent, 21 points lower than a year earlier.

“In April, the HPSI fell to its lowest level since the first few months of the pandemic, as consumers continue to report difficult homebuying conditions amid the budget-tightening constraints of inflation, higher mortgage rates, and high home price appreciation,” said Doug Duncan, Fannie Mae Senior Vice President and Chief Economist. “The current lack of entry-level supply and the rapid uptick in mortgage rates appear to be adversely impacting potential first-time homebuyers in particular, evidenced by the larger share of younger respondents (aged 18- to 34) reporting that it’s a ‘bad time to buy a home.’ Additionally, consumer perception regarding the ease of getting a mortgage also decreased across nearly all surveyed segments this month, suggesting to us that the benefit of the recent past’s historically low mortgage rate environment appears to have diminished, and affordability is poised to become an even greater constraint going forward. This sentiment is consistent with our forecast of decelerating home sales through the rest of 2022 and into 2023.”

Many consumers expect home prices may have peaked with 44 percent predicting further gains, down from 48 percent in March, while 28 percent think they may even go down. This pushed the net of those expecting higher home prices to 19 percent, down 9 points from March and 13 points year-over-year.

Both measures of personal financial sentiment moved lower as well. The percentage of respondents who say they are not concerned about losing their job in the next 12 months decreased from 86 percent to 84 percent and the net of those unconcerned also moved 2 points lower to 73 percent. A net of 12 percent reported higher family income than 12 months ago, a 4 percent monthly decline. The net reporting higher income, however, is up 8 percent from April 2021.