As home sales surged and prices soared, real estate investors were no small part of the mix.  CoreLogic says the share of home sales going to investors, large and small, climbed steadily during the pandemic, rising from around 14 percent in the spring of 2020 to a peak of 26.9 percent last October.

The data in the CoreLogic report, authored by economist Thomas Malone, is too limited, covering only the fourth quarter of 2021, to draw any solid conclusions, but they may be an early indication that investors are rethinking their business strategies.

Moore says that, after accounting for the largest share of home sales transactions in CoreLogic’s records in October, the investor portion slipped the following month for the first time since July 2020. It wasn’t a big decline, 1.5 percentage point, but by year-end the share of home purchases was at 20.4 percent. Moore adds that, while the percentage share fell, the absolute number of homes purchased was in line with historical winter investor activity.

In as shown in figure 2, the number of homes purchased by investors each month was fairly consistent pre-pandemic regardless of overall market movement. Malone says the trendline indicates that first quarter 2022 data may show that the investor share ticked back up in January and February if owner-occupied home sales slowed as they typically do in the winter months. It will be investor purchases in the summer months, when owner occupied buyers are most active, that will tell us whether the investor purchasing spree is here to stay or if investors will revert to their pre-pandemic level of buying. 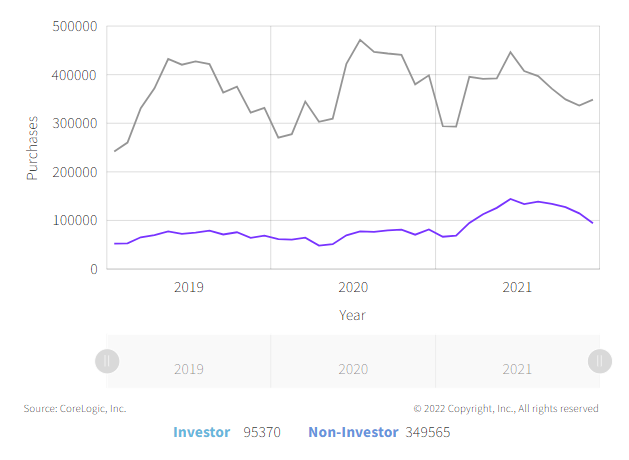 It is the large or institutional buyers who appear to have decreased their purchases since October. Large investors are those who retain 100 or more properties and their share of investor purchases declined from just shy of 26 percent in September to 20 percent in December 2021. Small investors, the so-called moms and pops who own three to ten properties, maintained the same 50 percent share of purchases that they had in December 2019 while the share of investor purchases by medium sized investors (10 to 99 properties) peaked at 34 percent at the beginning of 2021 then fell to 27 percent by late summer. Both small and medium investors increased their shares slightly at the end of the fourth quarter.

Investor purchases were down in all three price tiers. Their purchases in the top and middle third of sales prices in their respective metropolitan areas declined by 6 points between October and December of last year while they accounted for 19 percent of transactions in the bottom tier, a 5 percent drop. 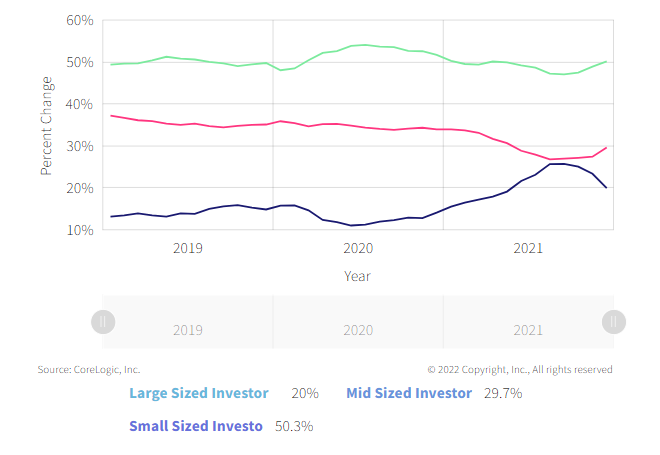 The share of investor purchases that were flipped within six months of purchase declined in the second half of 2021. Only 13.8 percent of homes obtained by investors last June met that definition of flipping by year end. This an 0.8-point decline from the prior June and down 1.3 points from June 2019. 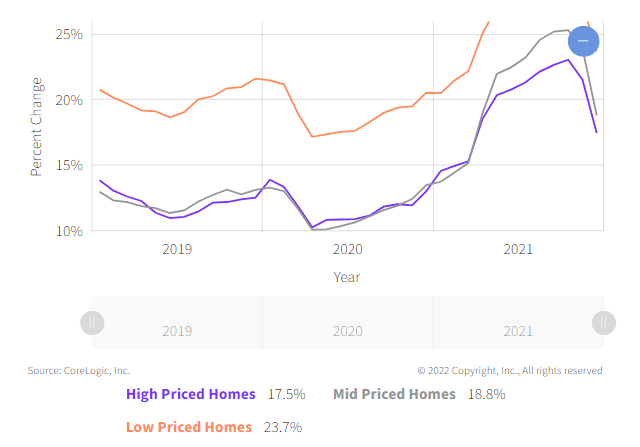 Malone notes that iBuyers, a specific category of flipper, increased activity sharply between May and August 2021, pulling back slightly toward the end of the year. While those buyers liquidated most of the properties obtained between January 2019 and the middle of 2021 within six months, those purchased after June 2021 remained largely unsold at the end of Q4. He says it seems certain most of those would have been sold in the first few months of 2022. 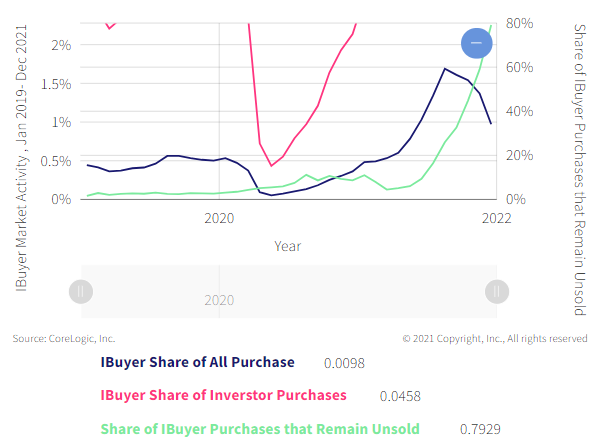 The author concludes that throughout last year, investment surge mirrored the unprecedented growth in home prices which increased unexpectedly in quarters two and three before slowing a bit in Q4. However, there was also an unexpected increase in January, “so despite showing the first signs of a slowdown, investor activity may well see an uptick in Q1 2022.”