Construction spending totaled $1.599 trillion in 2021, an increase of 8.2 percent from the $1.470 trillion spent in 2020. Residential spending, both public and private, was the only sector to post a double digit increase at 22.9 percent, while several categories saw spending plummet. Construction categorized as public safety took the worst hit, down 33.0 percent year-over-year, and office construction fell by 32.0 percent. Conservation and development projects and religious construction declined by 14.9 percent and 12.5 percent, respectively.

The U.S. Census Bureau said spending for all types of construction during December was at a seasonally adjusted annual rate of $1.640 trillion, a 0.2 percent increase from November and up 9.0 percent from the prior December. On a non-adjusted basis, the month’s expenditures totaled $123.582 billion, down from $137.573 billion in November.

Privately funded construction rose 0.7 percent from November’s pace to a seasonally adjusted $1.293 trillion in December. This was 12.7 percent higher than the previous December’s rate and again, it was residential construction driving the numbers. That spending was at a $810.288 billion, up 1.1 percent and 15.0 percent from the two earlier periods. The non-seasonally adjusted numbers for residential construction, were $58.962 billion spent in December and $67.571 billion in November.

National Association of Home Builders (NAHB) analyst Na Zhao attributed the monthly gains to “the strong growth of spending on single-family and multifamily construction, while spending on improvements slipped. Single-family construction spending increased to a $435 billion annual pace in December, up by 2.1 percent over the upwardly revised November estimates.” Multifamily construction spending rose 0.4 percent while spending on improvements slipped 0.1 percent in December on top of an 0.8 percent dip the prior month. Zhao said home building is still facing supply chain issues, which means industry is dealing with rising materials costs as well as ongoing labor issues.

Private residential spending during the year totaled $774.886 billion, a 23.2 percent gain from 2020. Single-family construction spending rose 32.8 percent to $410.800 billion and spending on construction in buildings with five or more units grew 15.6 percent year-over-year. 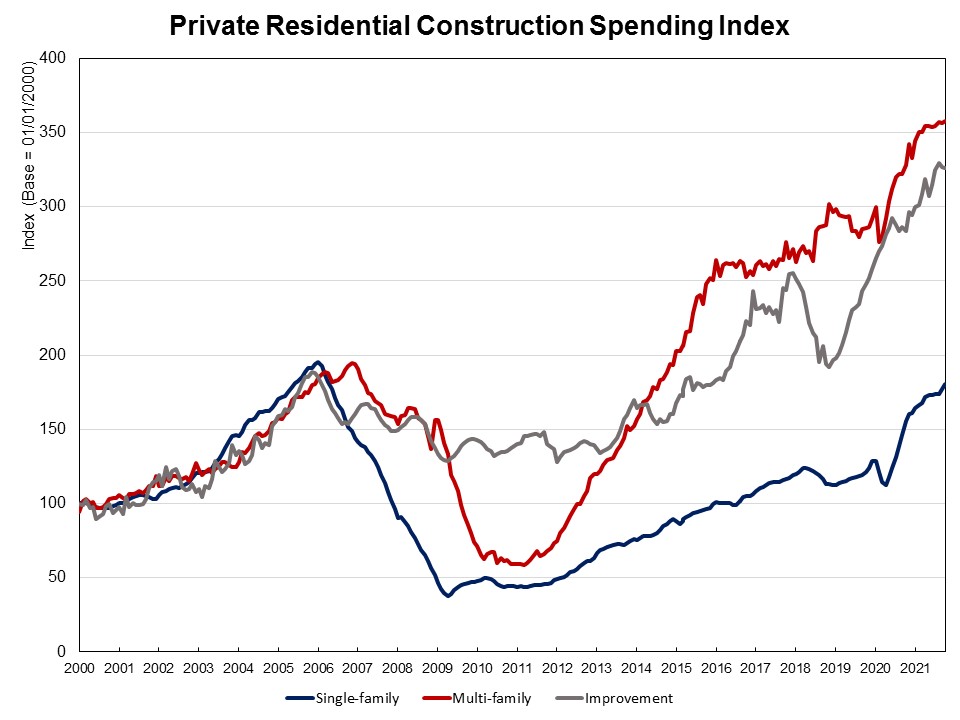 Publicly funding construction spending was down 1.6 percent from November and 2.9 percent compared to December 2020 at a seasonally adjusted $347.007 billion. Residential construction was at a $8.847 billion pace, retreating by 1.2 percent from the November rate and down 3.4 percent on an annual basis.

Yearly spending on all publicly funded project types was down 4.2 percent from the 2020 figure at $346.238 billion and residential spending in the public sector totaled $9.069 billion, a 1.3 percent decline.