Annual increases in each of the three S&P CoreLogic Case-Shiller indices slowed fractionally from October to November. However, the rate of appreciation in the House Price Index (HPI) produced by the Federal Housing Finance Agency (FHFA) increased slightly.

Case-Shiller’s U.S. National Home Price NSA Index, which covers all nine U.S. census divisions, was 18.8 percent higher in November than 12 months earlier. The annual increase in October was 19.0 percent. The 10-City Composite’s annual gain was 16.8 percent, down from 17.2 percent the prior month while the 20-City Composite slowed from 18.5 percent in October to an 18.3 percent year-over-year gain. 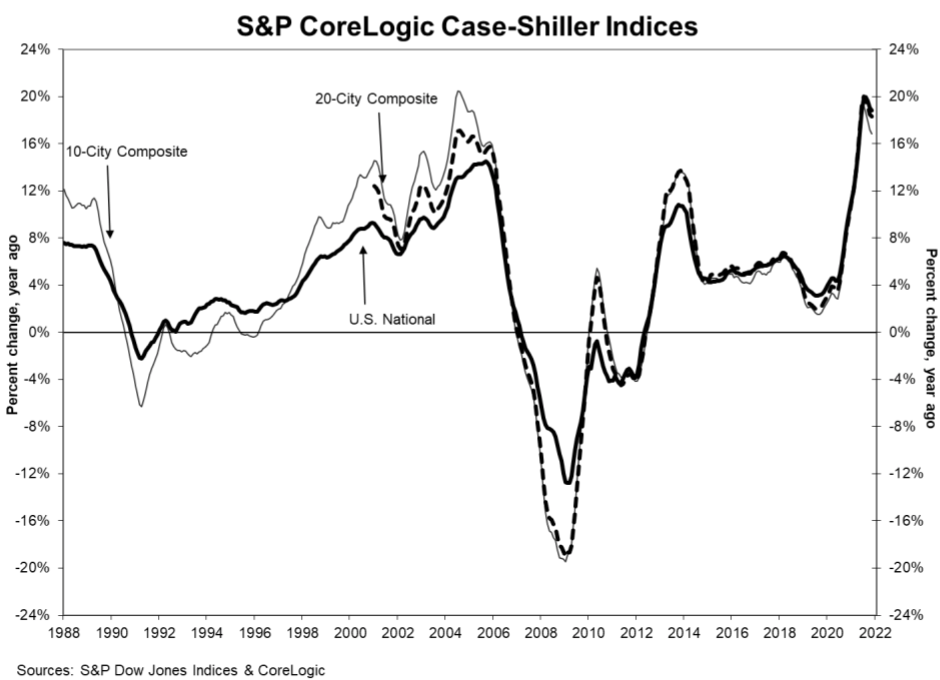 Phoenix, Tampa, and Miami held on to the top spot for annual appreciation among the 20 cities tracked.  Phoenix’s home prices rose 32.2 percent, leading the nation for the 30th consecutive month. It was followed by Tampa with a 29.0 percent gain and Miami at 26.6 percent. Miami narrowly edged out Las Vegas, Dallas, and San Diego. Eleven of the 20 cities reported higher price increases in the year ending November 2021 versus the year ending October 2021. Prices were strongest in the South and Southeast (both up more than 25.0 percent), but every region continued to log impressive gains.

CoreLogic Deputy Chief Economist Selma Hepp said, “While the November S&P CoreLogic Case-Shiller slowed for the third consecutive month, many markets continue to experience acceleration in annual gains. More than half of the 20 markets reported by S&P CoreLogic Case-Shiller had higher price growth in November, particularly warmer markets in Florida and the Southeast, as well as markets in [the] Southwest. Additionally, higher tier price ranges have remained relatively more resistant to economic forces, mortgage rates and COVID-19-related demand changes and continue to be magnet markets for many buyers. Given that these areas have also had the relatively largest gains in in-migration, pressure on prices has persisted and will likely remain over the coming year.”

“For the past several months, home prices have been rising at a very high, but decelerating, rate. That trend continued in November 2021,” says Craig J. Lazzara, Managing Director at S&P DJI. “The National Composite Index rose 18.8 percent from year-ago levels, and the 10- and 20-City Composites gained 16.8 percent and 18.3 percent, respectively. In all three cases, November’s gains were less than October’s.

“Despite this deceleration, it’s important to remember that November’s 18.8 percent gain was the sixth-highest reading in the 34 years covered by our data (the top five were the months immediately preceding November).

“We continue to see very strong growth at the city level. All 20 cities saw price increases in the year ended November 2021, and prices in 19 cities are at their all-time highs. November’s price increase ranked in the top quintile of historical experience for 19 cities, and in the top decile for 16 of them.

“We have previously suggested that the strength in the U.S. housing market is being driven in part by a change in locational preferences as households react to the COVID pandemic. More data will be required to understand whether this demand surge represents an acceleration of purchases that would have occurred over the next several years or reflects a more permanent secular change. In the short term, meanwhile, we should soon begin to see the impact of increasing mortgage rates on home prices.”

All three indices have now more that doubled their index readings since the housing recovery began in the winter of 2012. The National Index is up 106.1 percent while the 10-City and 20-City composites have increased by 101.1 and 110.7 percent, respectively.

The S&P CoreLogic Case-Shiller Home Price Indices are constructed to accurately track the price path of typical single-family home pairs for thousands of individual houses from the available universe of arms-length sales data. The National U.S. Home Price Index tracks the value of single-family housing within the Uni0ted States. The indices have a base value of 100 in January 2000; thus, for example, a current index value of 150 translates to a 50 percent appreciation rate since January 2000 for a typical home located within the subject market.

Prices on the FHFA HPI rose slightly faster year-over-year in November than they did in October, a 17.5 percent gain compared to 17.4 percent the prior month. On a monthly basis prices rose 1.1 percent, identical to the change in October.

Both annual and monthly price changes were positive for all nine census divisions. The seasonally adjusted monthly appreciation from October 2021 to November 2021 ranged from 0.5 percent in the West North Central division to 1.9 percent in the South Atlantic division. The smallest 12-month change, 13.3 percent, was in the West North Central division. The highest, in the Mountain division, was 22.8 percent.

“House price levels remained elevated in November, but the data indicate a pivot," said Will Doerner, Ph.D., Supervisory Economist in FHFA's Division of Research and Statistics. "The last four months reflect average gains of 1.0 percentage point, down from the larger prior changes during the spring and summer months. This new trend is a welcome shift but still twice the monthly average we have seen in the last 20 years, which echoes concerns about access and affordability in housing markets."

The FHFA HPI is derived from the purchase price of homes financed through loans that were acquired by Fannie Mae or Freddie Mac (the GSEs). The index was benchmarked at 100 in January 1991 and was at 362.4 in November 2021.