The national delinquency rate declined for the 7th consecutive month in October. CoreLogic’s Loan Performance Insights Report for the month says that loans that were 30 or more days past due, including those in foreclosure represented 3.8 percent of all active mortgages. This is the lowest rate for delinquencies since March 2020, the first full month of the pandemic. The rate fell 2.3 percentage points from 6.1 percent a year earlier and was down 0.1 point from September 2021.

The decline was reflected in all stages of delinquency. Newly delinquent loans, those 30 to 60 days past due, dipped 0.2 point from October 2020 to a rate of 1.2 percent 12 months later while the next stage, loans 60 to 89 days delinquent was cut in half to an 0.3 percent rate. Serious delinquencies declined from a 4.1 percent rate a year earlier to 2.2 percent this past October. 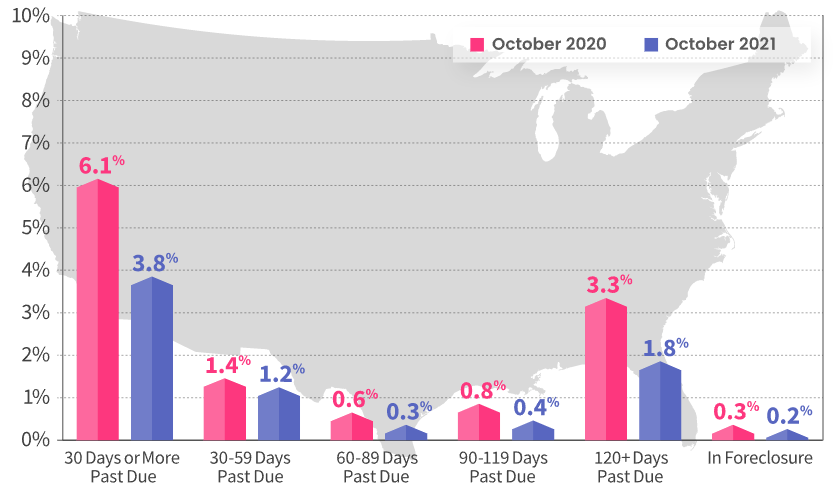 Perhaps surprisingly, the foreclosure inventory rate, loans in the foreclosure process, is at its lowest since 1999. That rate dipped to 0.3 percent compared to 0.3 percent the prior October. The COVID-19 related moratorium on foreclosure expired on July 31 of last year, so expectations were for an increase in legal actions. The rate of loans that transitioned from current in September to 30 days non-current in October was 0.7 percent. This is down from 0.8 percent in October 2020.

CoreLogic credited the significant improvement in the job market with some of the improvement. The Bureau of Labor Statistics reports that, an estimated 82 percent of the jobs lost in March and April 2020 had been recovered by October 2021, putting roughly 18.2 million Americans back at work. Increases in home equity and COVID federal assistance programs also helped reduce the delinquency rate to 3.8 percent. The pre-pandemic rate in October 2019 was 3.7 percent.

“Improving economic security and the benefits of disciplined underwriting practices over the past decade is helping reduce or avoid mortgage delinquencies,” said Frank Martell, president and CEO of CoreLogic. “We expect to see delinquency trend down over the balance of this year as the economy continues to rebound from the pandemic, employment grows, and high levels of fiscal and monetary stimulus continues.”

“Economic recovery and loan modification have helped reduce the number of loans that were in serious delinquency by just over one million from the August 2021 peak,” said Dr. Frank Nothaft, chief economist at CoreLogic. “Nonetheless, there were about one-half million more loans in serious delinquency in October than at the start of the pandemic in March 2020.”

All states logged year over year declines in their overall delinquency rate in October. States with the largest declines were Nevada (down 3.7 percentage points); Hawaii (-3.6 percentage points); and Florida (-3.5 percentage points). These were all states hard hit by the virtual elimination of tourism when the pandemic struck. Even those states that historically top the delinquency list have seen significant improvement over the last year. Louisiana has dropped from a 10.0 percent rate to 8.0 percent, Mississippi’s rate has improved by 2.6 points to 6.5 percent, and New York has gone from a 8.7 percent rate to 5.7 percent.