The Uncommonly Strong Case For Locking a Mortgage Rate

Almost everywhere you look, low mortgage rates are in the news.  Experts are claiming they'll remain low or move lower for years to come.  They might be right!  But that doesn't necessarily mean you should wait to refinance or to lock your rate if you're already in the loan process.

It is true that mortgage rates improved noticeably earlier this week.  Part of the improvement is due to overall gains in the bond market following last week's Federal Reserve scare.  When the Fed updated its policy framework, the bond market was briefly spooked.  A spooked bond market means higher yields/rates.

The next 5 business days brought a deliberate recovery for longer-term rates.  This can be seen in the following chart of 10yr Treasury yields (a benchmark for all longer-term rates in the US). Definitely make a note of the bounce toward higher rates today, as that helps build the case for locking to some extent. 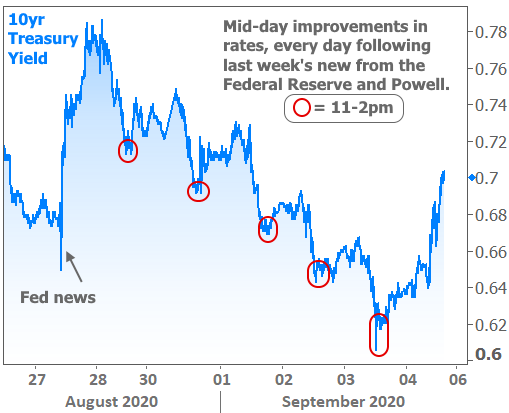 As far as mortgage rates are concerned, the delay of the new refinance fee was a much bigger source of inspiration.  Combined with the strong move in the bond market, it meant that many lenders were back within striking distance of all-time lows.

Why does this fee have so much influence on rates?

In a perfect world, this fee equates to about 0.125%-0.25% in terms of interest rates, and it would only apply to refinances.  That's still a big deal for many homeowners, but the actual damage ended being closer to 0.375%-0.500% due to the heavy-handed implementation (which would have cost lenders hundreds of millions of dollars on 10s of billions of dollars of loans in progress).

Unsurprisingly, lenders responded defensively by raising rates to offset the big unexpected expense.  This hit both purchases and refinances, and for much more than it would have with advance notice.

Thankfully, the delay was announced early last week and rates began to recover.  As they approached all-time lows this week, lenders experienced another surge in application volumes and were once again forced to raise rates a bit to control their pipelines.

By leveling-off near all-time lows, rates are presenting us with a natural opportunity.  In fact, these opportunities are rarely this clear.

The opportunity in question has very little to do with interest rate momentum in and of itself.  Predicting the future of interest rates is tricky business.  It's one thing to say that the economic realities associated with coronavirus will help rates stay very low for a very long time.  It's another thing to predict the back and forth movement within that low range, let alone determine when any given borrower would be best served by locking versus floating.

Rather, the opportunity is all about the reintroduction of the refi fee.  We already know it will be imposed on all refinances delivered to the housing agencies on or after Dec 1st.  That might seem like a long way away, but "delivery" can take up to a month from the loan actually closing. As such, we know it will be showing up on rate sheets fairly soon.  In some cases, it is already back in place for locks of 60 days or longer.

Why bring all this up?  Because the fee brings an immediate, measurable, and foreseeable hit to interest rates (again, it's 0.125%-0.25% for the average lender).  The smartest interest rate experts in the world would never be able to predict a 0.125% increase in rates with a high level of confidence, let alone 0.25%.  That's because rates almost always depend on market movement.  But the new fee exists independently from the market, thus offering an uncommon and unfair advantage to those who know it's coming.

Simply put, this is one of the few times in history where you can be absolutely certain that mortgage rates are about to be 0.125% higher than they otherwise would have been.  Combine that with the average lender coming very close to all-time lows this week and the scary little move higher in Treasury yields and it presents a compelling cases for locking.