Regular readers are all too familiar with my fairly regular habit of explaining discrepancies between reality and the typical mortgage rate headlines on Thursdays.  What's up with Thursday?  That's when Freddie Mac releases its weekly mortgage rate survey.

Freddie's survey is the longest-running, most deeply entrenched catalog of historical mortgage rates in the industry.  It serves as the foundation of strategic market analysis in several sectors.  It is the most widely-cited source for the news media's mortgage rate coverage.  It is even relied upon for certain calculations that determine whether loans violate certain lending laws.

All of the above is tremendously unfortunate by the time we consider just how stale the information can be.  Not to put too fine a point on it, the survey is best thought of as measuring rate changes from Monday to Monday, but waiting to report that number until Thursday morning at 10am ET!

The survey's official response window runs through Wednesday.  In that sense, the Thursday morning release time seems more reasonable. Unfortunately a vast majority of the responses are in by Monday.

Freddie officially states that most responses are received on Tuesday, but this is either not true or those responses are coming in early Tuesday morning before lenders update their rates for the day.  This is a longstanding contention of mine and if there was ever a report that confirmed it, it's today's!  Here's why: 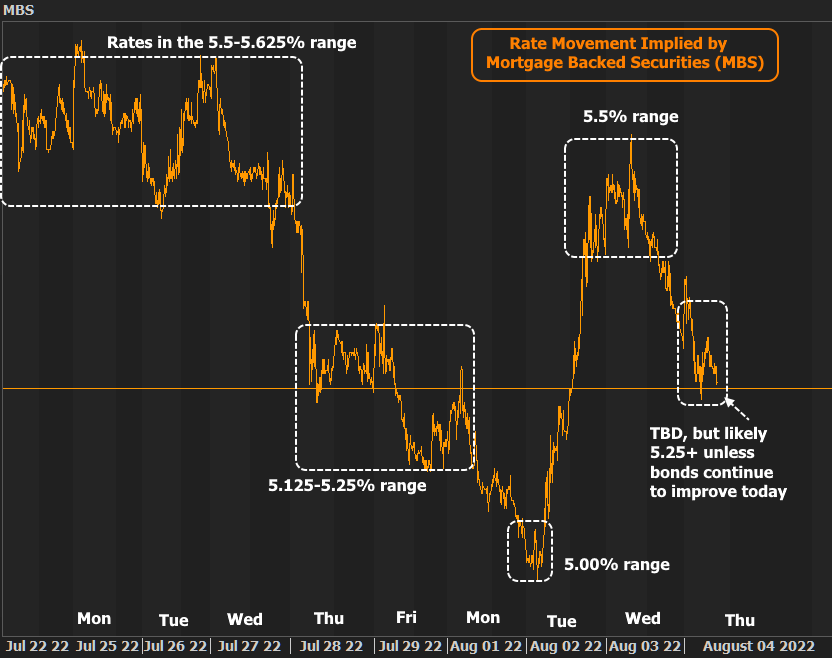 The chart above shows minute-by-minute movement in mortgage-backed securities, the raw ingredients that dictate the rates that can be offered by mortgage lenders (for those familiar with MBS prices, the line above has been inverted so it moves higher with higher rates and vice versa).

In short, Monday was the best possible time for mortgage rates this week. Our own daily numbers actually suggested rates were even lower than Freddie's by the time you account for the fact that we factor "points" into the rate itself (we logged 5.05% on Monday).  Rates then exploded higher on Tuesday, nearly hitting last week's highs of more than 5.5%.  They recovered substantially yesterday and may add to the improvement a bit today, but as you can see in the MBS chart, we're not yet back to Monday afternoon's levels.

Bottom line on 'points': If you didn't click the link above, just be aware that an additional point of upfront cost (1% of the loan balance paid upfront) has more value right now than almost any other moment in history.  A point historically drops the rate by 0.25%.  Right now, it's at least double that in most cases.  Even before today's improvements, the most aggressive lenders were quoting rates in the high 4's through the virtue of including a point in upfront cost.  We make no value judgment on whether points are good or bad.  They simply represent a choice to pay now vs 'over time.'  The key argument against points is that you may wish to refinance before you would break even on the extra expense.