Rates Up Roughly Half a Percent in 2 Days

We've devoted lots of time and space recently to discussing the uncommon mortgage rate environment recently.  The abbreviated thesis can be reduced to a few key bullet points:

With bond prices' ability to move rates already amplified, a relative big move in bonds has translated to record changes in rates.  This happened in our favor starting last Thursday and has been reversed as of today.  The initial drop in rates lasted 3 days (Thu/Fri/Mon) and the correction was in place as of this morning.

If all the above is true, we should be able to look at bond prices (which move inversely to rates) and see 3 days of gains offset by 2 days of losses resulting in roughly similar levels to Thursday morning.  The data does not disappoint! 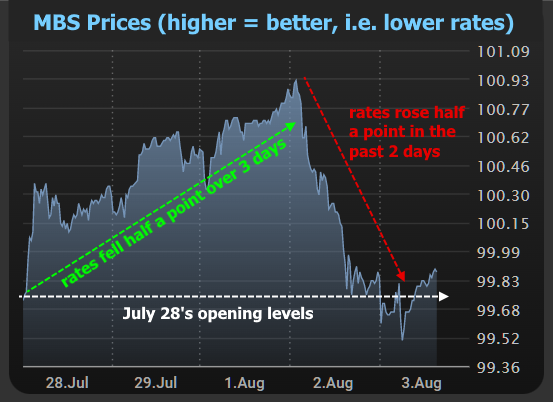 In nuts and bolts terms, the half point of improvement and deterioration roughly corresponds to the average lender moving from 5.50% to 5.0% and now back up to 5.50% all in the space of 5 days. This herculean round trip may exist in the past, but not since we began keeping daily rate records in 2008.

As far as the implications for the road ahead, there aren't any major, new revelations behind the recent volatility.  Rates are likely to continue to take guidance from economic data and the Fed's reaction to it.  With that in mind, Friday morning brings the important jobs report.  It will be out before the average lender publishes rates for the day.  That means more potential volatility, for better or worse.

For what it's worth, however, rates were rather resilient today, despite a very strong report on the services sector.  ISM's Non-Manufacturing PMI is one of the few top tier economic reports in the US with the power to cause big reactions in the bond market.  It surged well past expectations this morning.  Considering that weak economic data played a large role in last week's rate drop, it was surprising to see today's bond market resilience when this data presented a counterargument.