Thursday brought the much-anticipated policy announcement from the European Central Bank (ECB).  While our focus remains on mortgage rates in an entirely different continent, major goings on in European markets almost always have an effect on the equivalent U.S. markets.

When it comes to rates, the market of choice is bonds.  ECB officials unveiled a new bond-buying program that will add demand for certain European bonds.  All other things being equal, excess demand for bonds results in lower rates.  Lower rates in Europe spill over to lower rates in the U.S.

The above is a bit of an oversimplification, but an accurate one.  There are actually simple reasons for lower rates today as well!  Domestic economic data was quite weak, with one key business barometer (the Philly Fed Index) resulting in a chart that looks like this (lower lines = weaker economy): 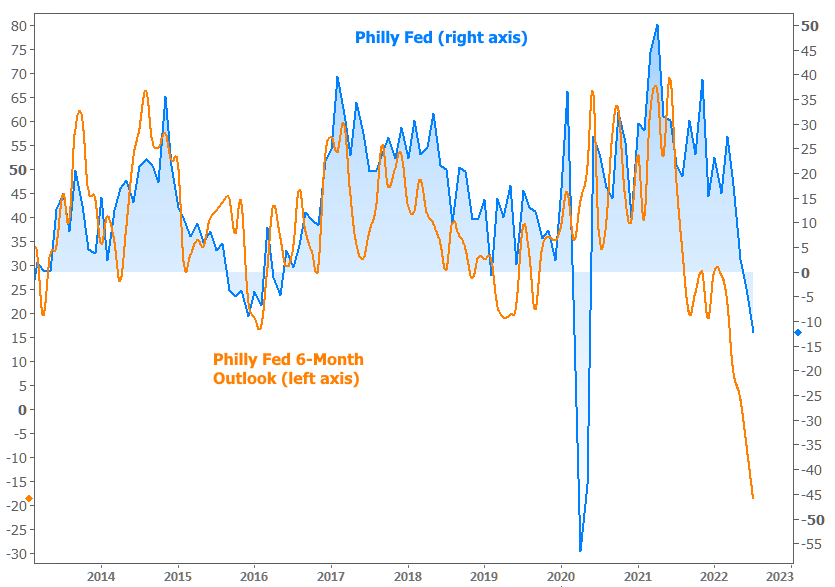 In other words, the Philly Fed Index is pointing to the biggest economic weakness since the initial covid lockdowns and the 6-month outlook is saying something even worse.

Weak economic data is one of the oldest and best friends of low interest rates.  A weaker economy helps ease demand side inflation pressure (inflation is a key enemy of low rates).  It also prompts investors to seek safer havens--investments that won't lose a lot of money if the economy continues to contract--and the bond market is the quintessential safe haven.

All that to say that European monetary policy decisions and weak U.S. economic data joined forces today to push investors into the bond market.  The bonds that specifically underlie mortgages improved by enough to justify fairly noticeable declines in rates.  We won't see all of that today due to the timing of the market improvement and the general tendency among mortgage lenders to avoid adjusting rates too quickly amid volatile market conditions.

But we did see SOME of the market improvement passed along to rate offerings.  The average lender is now offering top tier conventional 30yr fixed rates in the middle to upper-middle 5% range.

NOTE: rate quotes are all over the map right now, and one key reason is the outsized value of discount points in the current market.  For example, during more normal times, you might see two equivalent loan quotes (2 options from the same lender) where one option has one discount point in exchange for a 0.25% lower rate.  At present, however, that discount point can buy 0.5% to 0.625% in rate.

None of the above is intended to offer any commentary on whether paying points is wise.  Certainly, if we knew that rates would be quite a bit lower in 6 months, you wouldn't break even on the extra upfront expense of discount points (assuming you refinance in roughly 6 months).  The only reason I share the information is to explain why some rate quotes are so seemingly different.  In many cases, they're not very different at all.  One lender is just quoting a scenario with additional upfront costs (i.e. points) that bring the rate down.

For most scenarios with most lenders, borrowers should be able to choose between paying lower upfront costs with a higher rate or higher upfront costs with a lower rate.  When presented with both options, one simple way to evaluate them is to calculate the number of months it will take to recoup the additional upfront cost (feel free to adjust for investment opportunity cost if you like) and ask yourself if you're likely to be selling or refinancing before the "break-even" month.