Rather than serve to accelerate or crush the negative bond market momentum building at the end of 2019, 2020 has only compounded the broader sideways trend.  It hasn't been as boring as "sideways" tends to be either!  Credit the Iran flare-up for most of that volatility.  It was responsible for the sharp surge toward lower yields though last Tuesday and the de-escalation gets credit for the slightly less sharp return to weaker levels. 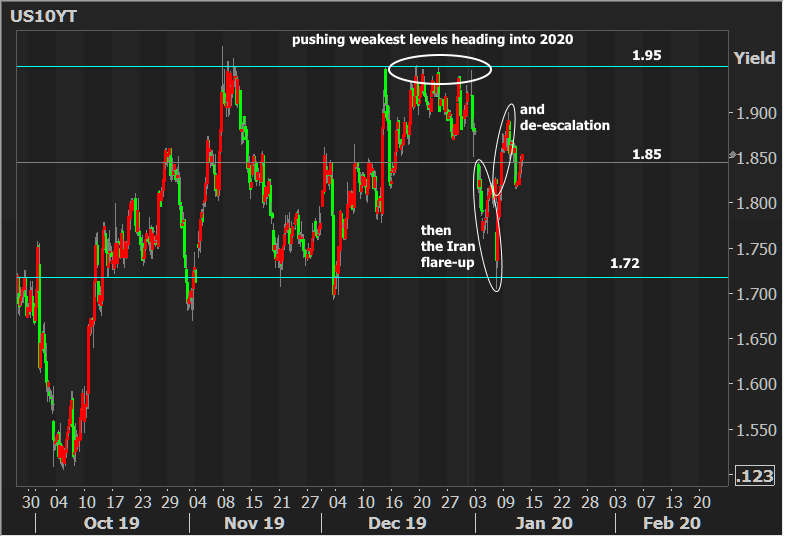 Notably, there hasn't been a stampede back to the higher yields from late 2019--a fact that could reflect some lingering doubts about Middle East risks or perhaps even the implications of last week's jobs report (i.e. slower than expected growth and a big drop in average earnings).

While it may seem like a bit of a stretch to pin bond market resilience on such a small miss in NFP (a report that markets have been increasingly capable of overlooking since the trade war hit its stride), the econ data is really all we have right now, apart from unexpected geopolitical or trade-related flare-ups.

That brings us to another potential source of bond market hesitation this week.  The phase-1 trade deal is supposed to be signed on Wednesday.  At the moment, we have no reason to expect that won't happen, but markets have learned not to fully price-in trade developments until the ink is dry.  Wednesday will be the first time the ink actually meets paper, and that could be worth a bit of extra weakness in bonds, all other things being equal.

On the data front, Core CPI is one of the week's biggest reports based on lifetime batting averages, but inflation isn't a concern until it is again (and that's not on the average trader's radar any time soon).  That leaves Thursday's Philly Fed and Retail Sales combo to do the heavy lifting for this week's econ data.  Either report is capable of causing movement--especially if both reports recommend the same move.