Have you heard the one about "holiday trading mode" in financial markets? It continues to be in full swing for bonds with lower volume, lighter liquidity, and a general absence of participation among those who turn the wheels behind the scenes.  While holiday trading weeks are always prone to random volatility and seemingly significant levels of movement that are tied to almost absolutely nothing, this year's example has been lopsided in favor of bond market weakness.  Today begins with Treasuries and MBS at their weakest levels in more than a month.

In general, December saw bonds achieve their best levels in several months with the help of lower inflation and a " 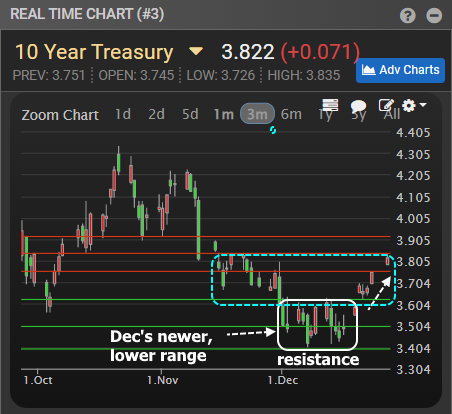 Despite the credit we're giving to holiday trading week vibes, there has been some legitimate defensiveness priced into Fed Funds Futures--the financial instruments that allow traders to bet on where the Fed Funds Rate will be in the future.  The focal point for the changes to outlook as definitely been the longer-run months.  September 2023's futures have moved up almost 15bps in the past week.  While that's not even one rate hike's worth of movement, it's still fairly big in the absence of much motivation. 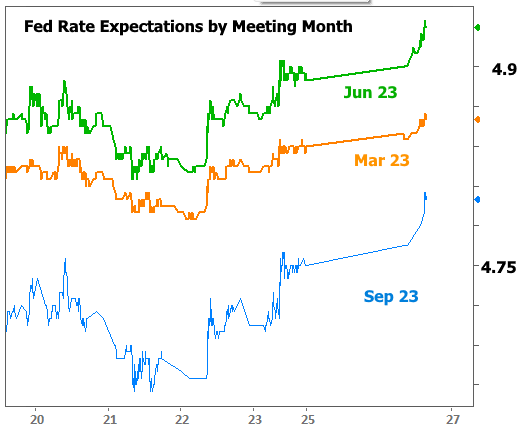 We're left to conclude that the market rallied as much as it was willing to rally based on the available data by the end of the year's liquid trading 2 weeks ago.  In other words, the resistance at the lowest yields in 3+ months meant there was nowhere to go but up.  Unfortunately, the "up" hit right as liquidity and volume evaporated, thus greasing the skids for a bigger move than we might otherwise be seeing during a more normal time of year.

We can also consider that there were a few organic market movers last week--most notably the policy shift from the Bank of Japan.  That said, it's also notable that bonds sold just as aggressively on Friday--a day without nearly as much justification in the data or headlines.  In other words, there's still a good case to be made for distortions from lighter volume and liquidity.