Sometimes You Have to Guess

Every now and then, the market moves decisively in one direction or the other due to economic data, but the movement is the opposite of what most market participants would have expected.  That is arguably the case with this morning's 8:30am ET data.  Core PCE inflation hit its forecast of 4.7 annually and 0.2% m/m, both down from the previous month. Durable goods tumbled well below forecast and the core number was only slightly stronger.

Despite the absence of negative bond market implications, bonds clearly lost ground in response to the data, thus leaving us to guess at the "why."  Traders could have been hoping for slightly lower inflation readings even though economists were right on target.  Traders could also have been waiting to sell bonds until ensuring the data didn't make a compelling case to the contrary.

From a technical standpoint, it's slightly easier to make a case for the weakness.  Yields were pressed right up against the upper boundary of the consolidation pattern (yellow line).  It would only have taken a light breeze to blow rates over the line, thus acting as a technical trigger for more selling.  This isn't necessarily a better explanation, but it's at least a logical one for those who place high belief in technicals. 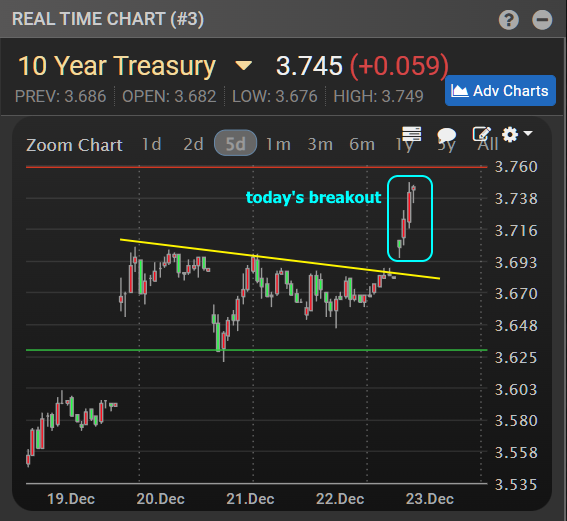 Either way, buyers have taken their ball and gone home.