This Isn't The Market Movement You're Looking For

It's unfortunate that we're now more than 40 years away from Alec Guinness's "these aren't the droids you're looking for" line in Star Wars.  It makes those of us who write things on the internet wonder how many readers get this wonderful allusion.  Whether it's Obi-Wan and droids or MBS Live and market volatility, the point is that one of us is telling the other one not to pay attention to those things that it seems like you should be paying attention to--even though those things are definitely actually right there in front of us.

This sentiment applies mostly to the general volatility this week (although it can apply to specific intraday head-fakes in MBS, as detailed here), which has taken 10yr yields up and out of their previous 3.42 to 3.62 range.  Granted, the policy change from the Bank of Japan on Tuesday was a legitimate market mover, but the resulting movement was bigger than it otherwise would have been outside the holiday season.

Since then, bonds seem to have decisively entered the most notable pattern associated with winter holiday weeks: complete cruise control mode.  This is marked by extremely linear trendlines guiding highs, lows, or both.  In this case, there's an overhead trendline serving to cap upward pressure in rates.  At this point in the week, any break above this trendline could be confidently disregarded unless another legitimate, unexpected market mover were to come to light (like the Japan news).  That's much less of a risk at the end of this week though. 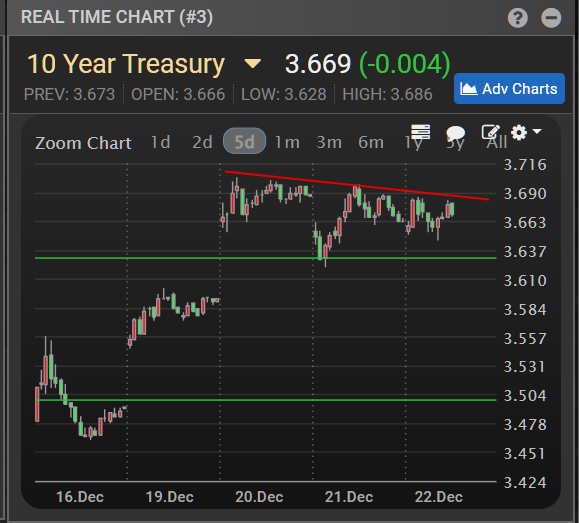